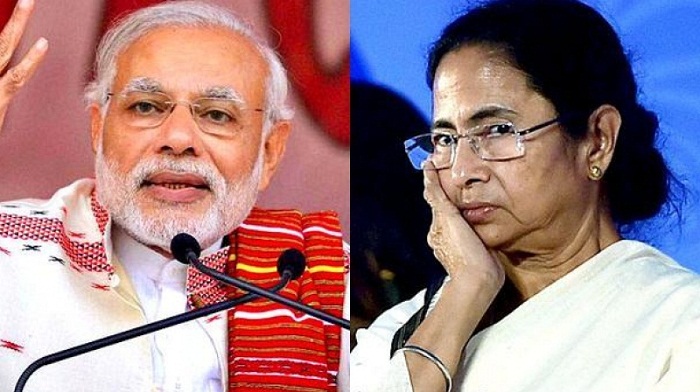 Prime Minister Narendra Modi Tuesday mocked TMC chief Mamata Banerjee for her prime ministerial aspirations and said she would have bought the post with the money looted from chit fund scams, had it been up for auction.

Modi said he feels “pity” for Banerjee as the PMs post can never be brought by money looted in Saradha and Naradha scams.

“To become the PM of a vast country like India a person has to earn the respect and blessings of its 130 crore people,” he said at a poll rally in Asansol’s industrial hub where union minister Babul Supriyo will take on actor-turned politician Moon Moon Sen of TMC in a four-cornered fight.

“By fighting in just a handful of seats, Didi (Banerjee) is dreaming of becoming a prime minister. If the post of the prime minister could be bought in auctions, then Congress and Didi wouldve bought it with the money they’ve looted from the country.

“Didi, the prime minister’s post is not available for auction that you can buy it with the money earned in Saradha, Narada (scams),” Modi said in his broadside. Banerjee, one of the most strident critics of the BJP, has been saying that Bengal and TMC will play an important role in the formation of the next government at the Centre.

She had also organised a rally of opposition parties in Kolkata in January. Harping on “rampant corruption and crimes” in the state, Modi said TMC is competing with Congress to break its record of corruption. “Under speed breaker Didi only corruption and crime are two non stop things in Bengal.

He said, “Before 2014, the Congress government had made a record of corruption. Today, the TMC government is giving tough competition to the Congress. Corruption and crime are non-stop under TMC rule, he said.

Modi raking up the issue of infiltration, which is high on BJP’s poll agenda, said that Banerjee has turned infiltrators into her cadres and is now using Bangladesh actors to campaign for her.

“I feel pity for Mamata Banerjee. TMC is in such a condition that people are not turning up for its rallies and it is forced to call actors from abroad,” he said while referring to the Bangladeshi actor Ferdous Ahmed campaigning for TMC.

Ahmed was asked to leave the country by the ministry of home affairs. He also ridiculed Banerjee’s ‘Bengal model of development’, which she plans to implement across the country if voted to power, as the “Tolabaji (extortion) model”.

Modi said “Mamata Didi wants to implement her Tolabaji Tax model of development across the country. But we will never allow that to happen”.

Mamata didi intends to apply the model of West Bengal to the entire country. This model refers to syndicate tax, illegal coal and sand mining. She wants to replicate this model across the country, he said.

Referring to the Balkote airstrikes, Modi said the country needs a government with “vision and not division”, “The new India wants safety and dignity. It is with the power of your votes that army jawans can carry out airstrikes, that in space enemy satellites can be hit.

He hit out Banerjee for seeking proof of it. “When our brave soldiers killed terrorists in Pakistan, Mamata Banerjee was one of those who had asked for proof. She should stop seeking proof of air strikes and seek proof against infiltration and chit fund instead,” he said.