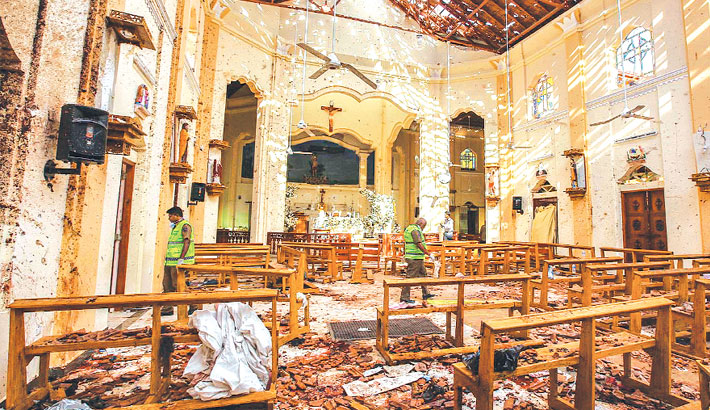 “The flames are silent, peace is violent, and tears are frozen.

Because massacre was chosen.”

Terrorism has become a festering wound. It is an enemy of humanity. Churches and hotels in Sri Lanka were hit by bomb explosions on the Easter Sunday, the 21st May 2019. We are born to die, but not on this demonic way. My heart is crushed.

The death toll in the Easter Sunday terror bombings climbs to almost 300 and counting with hundreds more wounded. It is devastating news for people across the world. I cannot imagine a human being could target the peaceful people on their celebration day. Those terrorists’ perverted disposition goes against the teachings of all religions.

This news from Sri Lanka is horrifying. My heart goes out to all victims and their families. So many were people attending church on one of the holiest of days, I am absolutely sickened. It is an attack on humanity. On a day devoted to love, redemption, and renewal, we pray for the victims and stand with the people of Sri Lanka.

There is no doubt that these attacks are the work of cowardly and despicable criminals who want to sow conflict and tear the world apart with any regard to innocent people. These attacks are another reason why we must always stand together and stand firm against all forms of violent extremism, whether they occur a half a world away or here Sri Lanka or elsewhere.

We should achieve unity and continue to better ourselves by constantly making an effort to understand each other and respect our differences. We must speak loudly and forcefully against the kind of extremism that is behind the bloodshed in Sri Lanka. Again, I must say I am heartbroken for the people of Sri Lanka.

There are no words that could possibly bring comfort or understanding at times like these - I can only offer my deepest sorrow and love along with the millions of others mourning for Sri Lankans. That is not also enough. Sri Lankan government must find out the real perpetrators to send them to the gallows.

When I visited the country 5 years ago, I found it a beautiful place with beautiful people. Sri Lanka, my heart is with you. I am praying for everyone affected by this horrible tragedy. This is insanity. Stay strong.

The world to join hands in the fight against terrorism, terms it an evil and a terrible scourge that should be wiped out completely from the face of the earth.

The right to the freedom of worship is a fundamental right. No political or other cause can justify or excuse the bombing of people at worship or simply going about their daily lives. The Sri Lankan attacks and a recent attack on a mosque in New Zealand are a challenge to us all to protect everyone’s freedom of religion and belief. Places of worship and other places must be places of peace, free from fear.

These people are our sisters and brothers. We stand in solidarity with them and they with us. Together we are one family of the resurrection. Such acts of violence on the Easter holy day are acts of violence against all beliefs and denominations, and against all those who value the freedom of religion and the choice to worship.

A series of explosions were reported at three churches, three hotels and two other places in several cities in Sri Lanka, including the capital Colombo. About 300 people, including several foreign nationals, have been killed and more than 500 wounded in the bombings. The church bombings occurred during Easter mass in Negombo, Batticaloa and Colombo while the three hotels targeted were the Shangri-La, Cinnamon Grand and Kingsbury hotels in Colombo.

An effective measure to stop terrorists is to cut their sources of revenue and disrupt logistics. The counter-terrorism strategy should be based on four strands: prevent, protect, pursue and respond. Our vision is to be secured and resilient nations that effectively prevent terrorism in ways that preserve our freedom and prosperity.

Secretary-General of the United Nation António Guterres words are of immense signification, “Our responsibility is to unite to build a world of peace and security, dignity and opportunity for all people, everywhere, so we can deprive the violent extremists of the fuel they need to spread their hateful ideologies.”

Modern day terrorism is not a national struggle for independence, but a murderous struggle carried out by religious fanatics who are fighting and willing to die for their principles. In the absence of appropriate legislation and supportive information systems, it is almost impossible to manage this type of struggle. It may be easier to track these terrorist cells by using a combination of technological and human surveillance.

Again, we are very sympathetic to the pain of those affected in Sri Lanka and in solidarity with Sri Lankans.

Noted educationist Dr. Ruwantissa Abeyratnethe has written, “The ultimate recommendation that the State should encourage entities involved with or responsible for the implementation of various aspects of the national security programme to identify their critical information and communications technology systems and data, including threats and vulnerabilities thereto, and to develop and implement protective measures to include, inter alia, security by design, supply chain security, network separation, and remote access control, as appropriate” and Bangladesh’s government should take some lessons from the terror attacks in New Zealand and Sri Lanka to prevent any such deadening attack or bomb blast… in our country.

The writer is a senior citizen, writes

on politics, political and human-centred figures, current and international affairs.