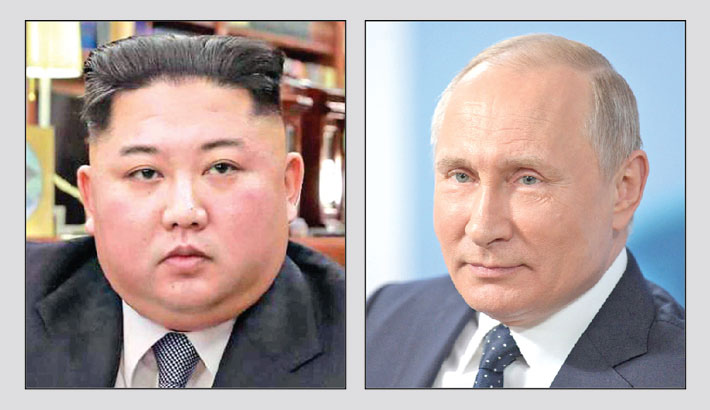 MOSCOW: Kim Jong Un and President Vladimir Putin will meet in Russia’s Far East on Thursday, the Kremlin said, as the North Korean leader looks to rebuild ties with an old ally amid a standoff with the United States, reports AFP.

Kremlin foreign policy aide Yuri Ushakov said the meeting—the first between the two men—would take place in the Pacific coast city of Vladivostok, before Putin heads to Beijing for another summit.

“The focus will be on a political and diplomatic solution to the nuclear problem on the Korean Peninsula,” Ushakov told a briefing on Tuesday.

“Russia intends to help consolidate positive trends in every way,” he said.

Anticipation for the summit had been building since the Kremlin announced last week the two men would meet by the end of April.

Russian and North Korean flags were already flying on lamp posts Tuesday on Vladivostok’s Russky island, where the summit is expected to take place.

The talks follow repeated invitations from Putin since Kim last year embarked on a series of diplomatic overtures.

Since March 2018 the formerly reclusive North Korean leader has held four meetings with Chinese President Xi Jinping, three with the South’s Moon Jae-in, two with US President Donald Trump and one with Vietnam’s president.

Analysts say he is now looking for wider international support in his standoff with Washington.

At Kim’s last summit with Trump in Hanoi in February, Pyongyang demanded immediate relief from sanctions imposed over its nuclear weapons and ballistic missile programmes. But the talks broke down over what North Korea was prepared to give up in return.