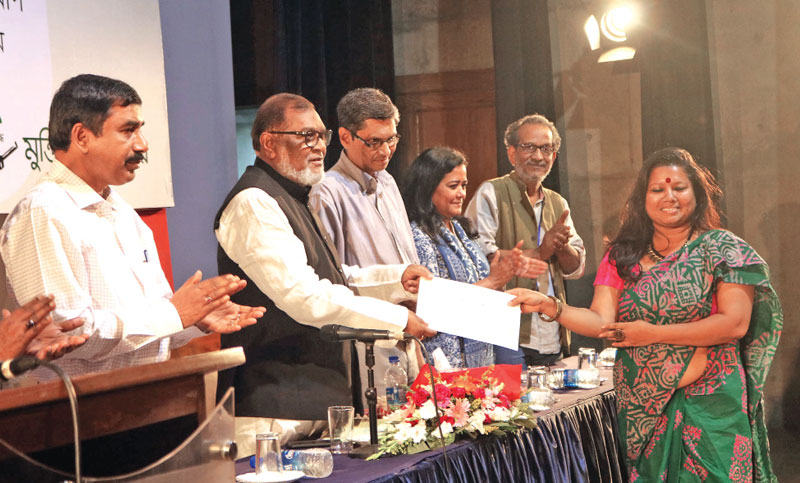 The closing ceremony of the 7th International Festival of Docufilms on Liberation and Human Rights- 2019 was held at the Liberation War Museum on Monday evening.

Liberation War Affairs Minister A K M Mozammel Haque attended the programme as chief guest. While, Dhaka Film Archive Director General Bidhan Chandra Karmakar, Dhaka University Mass Communication and Journalism department Chairman and one of the jury board members of this festival Kaberi Gayen, festival director Tarek Ahmed, eminent cultural personality and Chairman of Dhaka DocLab Nasir Uddin Yusuff Bachchu, Cinematographer and one of the trainers in this workshop Nilotpal Majumdar and Trustee Board members of Liberation War Museum Mofidul Haque and Robiul Hossain among others were present on the occasion the guests.

Earlier, the festival started on 18th April at the Liberation War Museum in the capital’s Agargaon area. The theme of this year’s festival was Rohingya Persecution.

Jury board member Kaberi Gayen awarded director Fuad Chaudhury’s film ‘Merciless Mayhem’ as the best documentary among the 6 documentary films that were part of the main competition, titled as ‘1971 and Beyond’.

A total of 12 young directors presented their projects in the special workshop titled ‘Exposition of Young Film Talent’.

The festival committee announced the theme of next year’s festival titled as ‘Bangabandhu: The Liberator’ with a vision to celebrate the centenary of the father of the nation Bangabandhu Sheikh Mujibur Rahman.