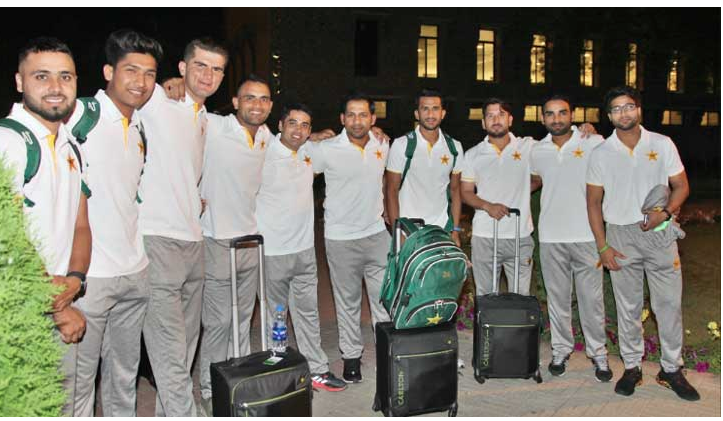 Pakistan cricket team  on Monday left for England  on  a  hectic tour during which green shirts will play one T20 practice match, a Twenty20 International, four 50-over warm-up matches and five ODIs before participating in  ICC World Cup.

Pakistan  will play the T20I against England on may 5 at  Cardiff, while the first ODI  of five -match series  would be  played  on  may 8 at the Oval.

The ICC Men's Cricket World Cup is slated to be held from May 30 to July 14 in England. The first match of the World Cup to be played between Australia and South Africa.

Pakistan will take West Indies in their World Cup opener on May 31 at Trent Bridge. The much awaited encounter of the tournament would be played between Pakistan and India on June 16.

Earlier on Monday, speaking to the media at Gaddafi Stadium Lahore, Arthur  showed confidence in the squad picked for the upcoming world series.

He said: "We have faith in our team. All 15 of those players have the ability to win games," adding that they  have to bring all their capabilities to produce results in their favour.

"We have worked really hard over the past two years. We are as prepared as we can be," he added.

Speaking about Shadab being ruled out of the upcoming series against England, Arthur said: "He is a wonderful cricketer. As the buzz word nowadays goes, he’s ‘three-dimensional’. He plays a key role for us just outside the power play. However, we have tried to cover with another wrist spinner Yasir Shah."

Pakistan squad has been announced for the tour of England to play the series against the hosts and later the ICC Men’s Cricket World Cup 2019.

Sarfraz Ahmed will lead both the squads.