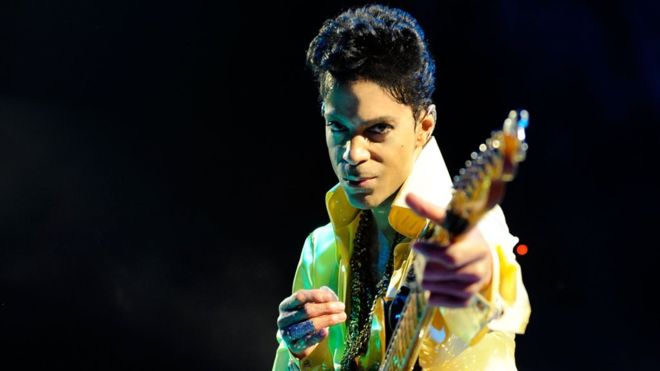 The Beautiful Ones, an unfinished memoir by the pop star Prince, is due to be released in October.

Fifty handwritten pages, which Prince submitted a month before his death, will form the basis of the book, which has been "newly envisioned" as a scrapbook of his life.

It will also include rare photographs and handwritten lyrics, alongside the original draft script for Purple Rain.

Prince, who died in April 2016 from an accidental overdose of the pain medication fentanyl, was one of the "big three" superstars of the 1980s, alongside Madonna and Michael Jackson.

He was purposefully inscrutable, rarely giving interviews and building his own mythology through music. But in the year before his death, he had started to let his guard down, reflecting on his life and career during a solo tour titled Prince: Piano & A Microphone.

Those concerts appeared to inspire the idea of a memoir, which Prince announced at a private show in Manhattan in 2016.

"We're starting right at the beginning - my first memory - and hopefully we can move all the way to the Super Bowl," he told the audience.

"You all still read books, right?"

Random House described The Beautiful Ones as "the deeply personal account of how Prince Rogers Nelson became the Prince we know: The real-time story of a kid absorbing the world around him and creating a persona, an artistic vision, and a life, before the hits and the fame that would come to define him".

The memoir, which is named after a track on the Purple Rain album, will include an introduction by New Yorker writer Dan Piepenbring - who Prince had chosen as his collaborator, describing him as "a good critic" who was "not a 'yes' man at all".

Piepenbring's essay will touch upon his encounters with the star, at "a time when Prince was thinking deeply about how to reveal more of himself and his ideas to the world, while retaining the mystery and mystique he'd so carefully cultivated".

The book's editor Chris Jackson added: "Millions of words have been written about Prince - books and articles, essays and criticism - but we're thrilled to be publishing Prince's powerful reflections on his own life in his own incandescently vivid, witty and poetic voice.

"His death was an unfathomable loss, but this book is a beautiful tribute to his life."