Who are the victims of the Sri Lanka attacks? 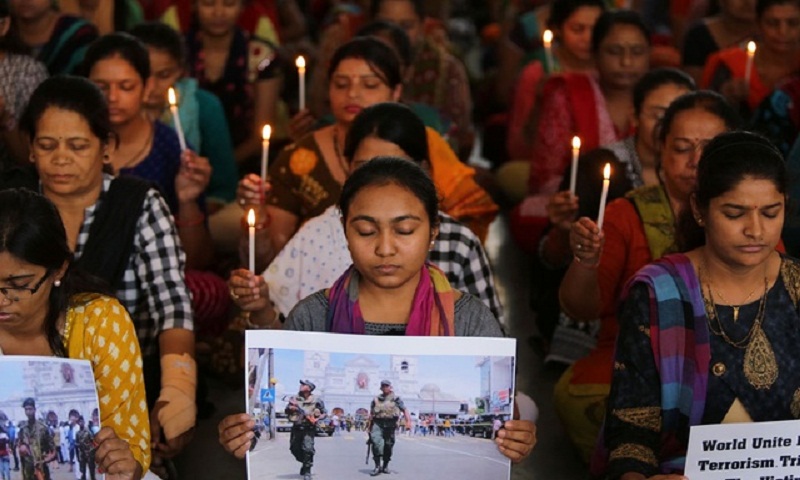 Sri Lanka is in shock after a wave of bombings targeting churches and hotels left 310 people dead. Churches were hit during Easter services on Sunday in the cities of Colombo, Negombo and Batticaloa.

The government temporarily restricted some social media networks to try and halt the spread of misinformation, so details have been slow to emerge. But this is what we know so far about those who lost their lives.

One of the first victims to have been identified last night was Sri Lankan celebrity chef Shantha Mayadunne.

Her daughter Nisanga Mayadunne had posted a picture of the family having breakfast in the Shangri-La hotel in Colombo shortly before an explosion occurred there.

One of their family members later posted on Facebook confirming that both Shantha and Nisanga had died, saying "no words can describe the pain"

Four Sri Lankan staff members at the Taprobane restaurant in the Cinnamon Grand hotel have died in the attacks.

"It was a busy morning. It's Sunday morning during buffet breakfast so it's one of our busiest periods," the Cinnamon Grand hotel spokesman told the BBC.

"They were servers at the restaurant. One of them was working at the live food stations making hoppers [a Sri Lankan pancake]."

They have been identified only as Shantha, Sanjeewani, Ibrahim and Nisthar.

Three staff members at the Shangri-La

The Shangri-La Hotel in Colombo announced in a Facebook statement that three of its staff were "fatally injured in the course of their duties".

No further details are known so far.

Three children of Danish billionaire Anders Holch Povlsen died in the attacks, a spokesman has confirmed to the BBC. The company was unable to reveal any more details at this time and asked for the family's privacy to be respected.

One of his children had four days ago posted a picture on Instagram that was geo-tagged Sri Lanka.

Mr Povlsen, 46, owns the Bestseller clothing chain and is the largest stakeholder in the hugely popular online retailer Asos.

The deaths were confirmed by the UK's High Commissioner to Sri Lanka, James Dauris.

Three family members were among the victims.

Ben Nicholson said that his wife Anita, his 14-year-old son Alex and 11-year-old daughter Annabel were killed in the restaurant of the Shangri-La Hotel.

"Mercifully, all three of them died instantly and with no pain or suffering," Mr Nicholson said in a statement.

"I am deeply distressed at the loss of my wife and children. Anita was a wonderful, perfect wife and a brilliant, loving and inspirational mother to our two wonderful children.

"The holiday we had just enjoyed was a testament to Anita's enjoyment of travel and providing a rich and colourful life for our family, and especially our children.

"Alex and Annabel were the most amazing, intelligent, talented and thoughtful children and Anita and I were immensely proud of them both and looking forward to seeing them develop into adulthood."

Mr Nicholson also asked the media to "respect our privacy and allow us to grieve together".

Eight Indians, including four from a political party

Eight Indian nationals, five of whom were political party workers from Bangalore, died in the bombings.

The party workers have been identified as K G Hanumantharayappa, M Rangappa, K M Laxminarayan and Lakshmana Gowda Ramesh. They were said to be members of the Janata Dal Party (JDP).

The chief minister of the Indian state of Karnataka, H D Kumaraswami said in a tweet that he had known some of the party workers personally, adding that he was "deeply shocked".

The JDP workers had decided to take a holiday in Sri Lanka after polling for the Lok Sabha elections ended in the state on 18 April.

"They reached the hotel around 08:00 or so and headed straight to the breakfast table when they were killed," S. Shivakumar, Shivanna's brother-in-law, told BBC Hindi's Imran Qureshi.

The 58-year-old, who was originally from Kerala, lived in Dubai with her husband but travelled to Colombo to meet her relatives.

He left for Dubai on Sunday morning and she was due to leave Colombo on a later flight on the same day.

But she was killed shortly after checking out of the Shangri-La hotel.

"Her life was just snubbed out in a few hours," her brother-in-law Usman Kukkady told news outlet the New Indian Express.

The couple have a son and daughter who are both living in the US, said the news outlet.

Engineer Serhan Selcuk Narici moved to Colombo in March 2017, according to his Facebook profile.

His father, Baba Memhet Narici, told Anadolu that his son was an electrical engineer. He had last been doing some work at the US embassy building in Sri Lanka.

"He sent me a WhatsApp message this morning at 5am saying 'Good Morning'", said Mr Narici. "That was the last I heard from him."

The other victim - Yigit Ali Cavus - was also an engineer.

"He was a brilliant child. He graduated with honours from the Istanbul Technical University and spoke two languages," said his father.

It is not yet clear where they were when the attacks took place.

An Australian mother and her 10-year-old daughter were killed during the Easter Sunday service at St Sebastian Church, in Negombo city.

Manik Suriaaratchi and daughter Alexandria attended the church every Sunday, along with her husband Sudesh Kolonne.

He had just walked out of church ahead of them when the bomb went off.

"I heard a huge noise ... I saw my daughter on the floor and I tried to lift her up, [but] she was already dead. And [then]... next my wife is there," Mr Kolonne told news outlet ABC.

The family had moved from Melbourne to Sri Lanka in 2014 after Ms Suriaaratchi started a business in the country.

The grandson of a Bangladeshi politician

The grandson of Bangladeshi MP Sheikh Fazlul Karim Selim has been killed in the attacks.

Mr Selim's grandson - who is himself a prominent member of the Awami League political party - died in an explosion in the hotel where the family was staying, according to local media reports. It is not clear which hotel this was.

Mr Selim's personal assistant told news outlet the Dhaka Tribune that the boy's father was also injured in the blast.

Rui Lucas was on honeymoon with his wife, Portuguese media report. They had been married just over a week.

Mr Lucas, believed to be in his early 30s, died in the attack on the Kingsbury Hotel, where the newlyweds were staying. His wife survived the attack.

He has been described by one of his work colleagues as "a person with a huge heart, a great friend", Portugal's publico.pt website reports.

Monique Allen was on holiday with her three sons and husband Lewis when the Cinnamon Grand hotel was bombed.

She was having breakfast downstairs with one of her sons. Her husband and two of her other sons were in their room. The rest of her family members survived the attack.

"My son and my wife were sitting right next to each other [when] the explosion happened," Mr Allen told the BBC.

"[He] blacked out for a few minutes and he woke up and saw his mother with a big head wound and lots of blood."

Mr Lewis found his son injured at his hospital and only later found his wife when he checked the mortuary.

"[At the mortuary] they were pulling back sheet after sheet. I was praying let that not be Monique," he said.

"Then they lifted the sheet on one and that was my wife there... she was the best wife and the best mother."

Dieter Kowalski from the US state of Colorado

Forty-year-old Dieter Kowalski, a Denver resident, was in Sri Lanka on a work trip. On Friday, he had posted on Facebook: "And the fun begins. Love these work trips. 24 hours of flying. See you soon Sri Lanka!"

Mr Kowalski worked for Pearson, an education management company, as a senior technical operations lead. The company confirmed to NBC News on Monday that Mr Kowalski had been killed shortly after he arrived at the Cinnamon Grand hotel.

"Colleagues who knew Dieter well talk about how much fun he was to be around, how big-hearted and full-spirited he was," Pearson chief executive John Fallon wrote in a letter to employees.

Mr Kowalski's brother, Derrick, also shared on Facebook: "We have all lost a brother today."

Kieran Shafritz de Zoysa, a fifth grade student at the prestigious Sidwell Friends school in Washington, was one of four Americans killed.

Kieran had been on leave for the year in Sri Lanka, the Washington Post reported.

"Kieran was passionate about learning, he adored his friends, and he was incredibly excited about returning to Sidwell Friends this coming school year," the school said in a letter to families.

Meanwhile, a state department official was quoted by US media as saying that at least four American nationals were killed in the attacks.