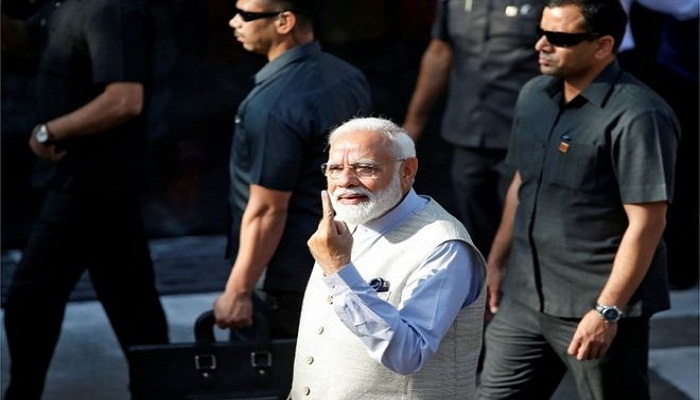 He led what appeared to be a roadshow on his way to the polling booth in Ahmedabad, the city he lived in during his 13 years as chief minister.

He waved at the crowds that had gathered from an open-top jeep, which had replaced his usual bulletproof car.

Mr Modi is contesting from Varanasi, which goes to the polls on 19 May.

Tens of millions of people are preparing to cast their votes on Tuesday - 115 seats spread across 14 states and union territories are up for grabs. It is the largest stage of the whole election, which is being seen as a referendum on Mr Modi, who has been in power since 2014.

It's also important for Mr Modi and his Hindu nationalist Bharatiya Janata Party (BJP), as Gujarat is his home state and where his political career began. Mr Modi won his first parliamentary seat from Vadodadara in Gujarat in 2014 - but he vacated it as he also contested and won Varanasi.

On Tuesday morning, Mr Modi first travelled to the capital city of Gandhinagar to meet his mother before going to Ahmedabad to vote.

After voting in the seat of Ranip, he walked down the street along with a local BJP candidate. He was surrounded by his bodyguards as he displayed his inked finger and waved at people.