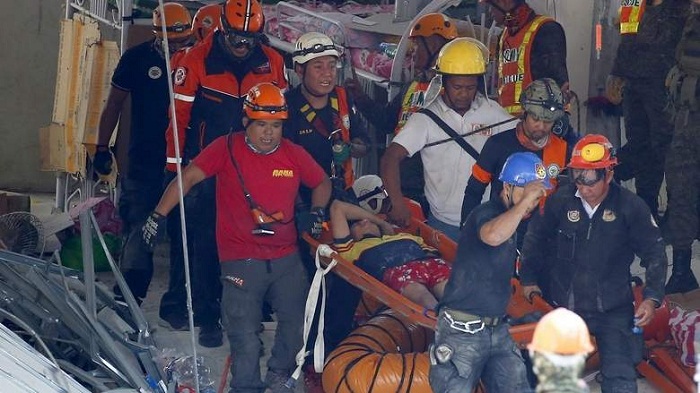 Rescue teams in the Philippines searched for signs of life beneath the rubble of a collapsed four-storey commercial building on Tuesday after a strong earthquake shook the country's biggest island, killing at least 11 people.

Heavy lifting equipment and search dogs were used as dozens of firefighters, military and civilian rescue teams raced to shift piles of concrete in the town of Porac, about 108 km (67.1 miles) northeast of Manila, where a 6.1 magnitude earthquake destroyed several buildings on Monday.

During the night, seven people were rescued and four dead bodies were pulled out of the rubble of the commercial building, which had caved in on a ground floor supermarket, officials said.

"The rescue is ongoing, they are still hearing a sound, no one can say how many were still trapped," Pampanga provincial governor Lilia Pineda said in a radio interview.

The quake, which struck at 5 p.m. local time on Monday, was initially reported as being of 6.3 magnitude and later revised down to 6.1 magnitude, the US Geological Survey and Philippines seismology authorities said.

The Philippines is prone to natural disasters, located on the seismically active Pacific "Ring of Fire", a horse-shoe shaped band of volcanoes and fault lines that arcs round the edge of the Pacific Ocean.

The earthquake was felt strongly in key business areas of Manila, with residential and office buildings evacuated after being shaken for several minutes. Train services were halted and roads and sidewalks were clogged by the sudden exodus of workers.

The government declared Tuesday a holiday for civil servants in Metro Manila to allow for safety inspections of buildings.

The international airport in Clark, a former US military base in Pampanga, remained closed for repairs, while parts of a one corner of a historic church in the province collapsed.