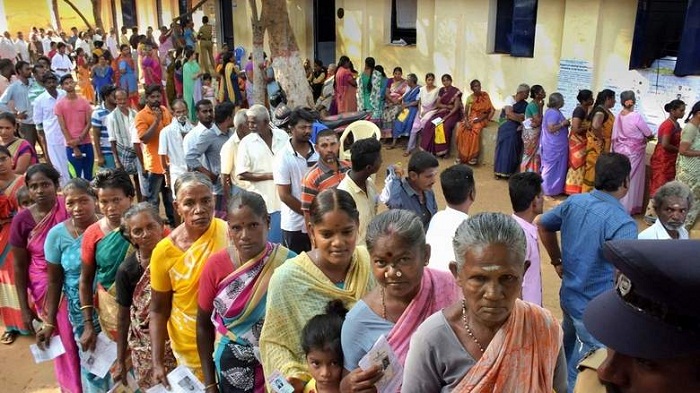 Voting began on Tuesday across 117 Lok Sabha constituencies spread over 15 states and Union Territories as the third - and largest - phase of the mega seven-phase electoral exercise kicked off.

A total of 116 seats across 14 states were slated to see voting in the phase including polling in the first of the staggered polling in Jammu and Kashmir's Anantnag constituency.

The chief of the two main political parties are in fray in the third phase with BJP President Amit Shah making his Lok Sabha election debut from Gandhinagar and Congress President Rahul Gandhi contesting from Wayanad, which he also contesting along with his traditional Amethi seat.

The Bharatiya Janata Party (BJP) will aim to defend the 62 of the 117 third phase seats it won in 2014 and its performance in this phase will be crucial in deciding its political fortunes.

People also came out to vote in four constituencies in Assam (out of 14), and the lone seats in the Union Territories of Daman and Diu, and Dadra and Nagar Haveli.

With the third phase, voting will be completed in all seats of Gujarat, Kerala, Goa, Karanataka, Chhattisgarh, Assam, Karnataka, Kerala, Dadra and Nagar Haveli and Daman and Diu.

The seven-phase Lok Sabha elections started on April 11 and would conclude on May 19. Counting of votes will take place on May 23.

Live updates of the third phase of voting in the 2019 Lok Sabha polls:

Modi votes in Ahmedabad:  PM Narendra Modi  cast his vote at a polling booth in Ranip, Ahmedabad, a part ofthe Gujarat's Gandhinagar parliamentary constituency, in the third phase of the Lok Sabha polls.