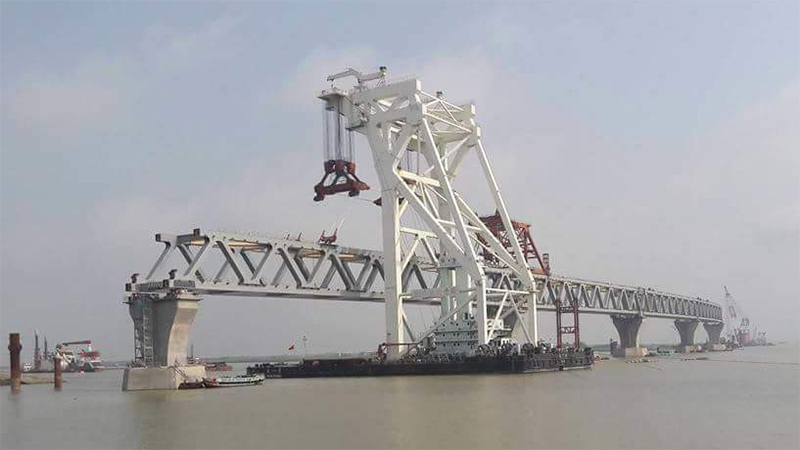 The 11th span of Bangladesh’s biggest infrastructure project Padma Bridge was installed on the 33rd and 34th pillars at Jajira point today (Tuesday), making 1,650 metres of the bridge visible.

According to a media report quoting a senior official of the Padma Bridge projet, the span was installed at 9:00am on Tuesday.

Earlier, two spans were installed on the pillars of 4-5 and 13-14 at Maowa point.

Humayun Kabir, Sub assistant engineer of Bridge Division said they are expecting that it would be possible to set up at least one span in every month. Some 75 percent works of the Padma Bridge are done.

A total of 41 spans will be installed on 42 concrete pillars for the bridge.

The construction work of the long-desired Padma Bridge began in December, 2015 and the first span was installed on September 30, 2017.

The length of the steel structure double-deck Padma bridge is 6.15 kilometres. The trains will run through the lower deck while the road will be on the upper level of the bridge.

After completion of the construction works of the Padma Bridge, the capital will be directly connected with 21 southern districts of the country through road and railways