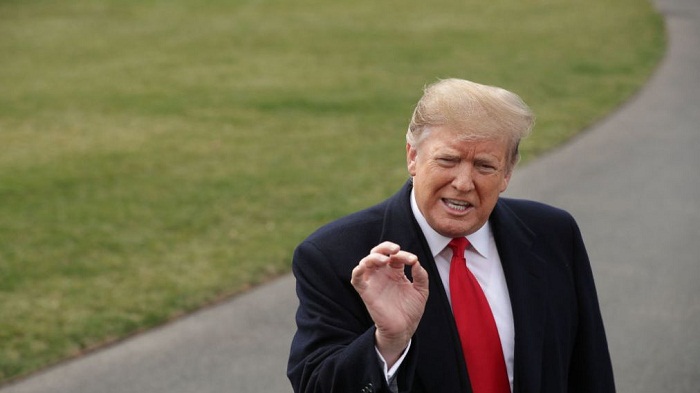 President Donald Trump contended Monday that none of his underlings routinely defy his commands, despite numerous examples contained in Robert Mueller's report showing aides ignoring or refusing his dictates.

"Nobody disobeys my orders," Trump said during a walkabout on the South Lawn for the annual Easter egg roll.

He was questioned by CNN's Kaitlan Collins about whether he was worried some of his staff were shrugging off his requests, as depicted by Mueller, whose full redacted report was made public last week.

The document contained anecdote after anecdote of aides refusing to carry out some of Trump's demands to short-circuit the special counsel's investigation. The trend was so marked the report's authors made note of it in their assessment.

"The President's efforts to influence the investigation were mostly unsuccessful, but that is largely because the persons who surrounded the President declined to carry out orders or accede to his requests," the report read.

The report paints a picture of aides repeatedly ignoring or brushing aside Trump's dictates -- both in the interest of guarding the President from his own worst instincts and of protecting themselves from further legal implications.

That included acts by Trump's former White House counsel, his former chief of staff, a former staff secretary and multiple other formal and informal advisers.

According to White House officials, that dynamic has been a constant undercurrent to Trump's presidency, including on matters of policy like immigration and trade.

Aides have consistently worked privately to forestall or prevent Trump from taking actions deemed unwise or worse, relying either on diversionary tactics or the belief Trump would eventually forget his commands.

Trump, meanwhile, detests the impression that he is managed by aides, and spent part of the weekend stewing at the report's assessment that some of his staff regularly ignored what he told them to do. He has been seeking assurances from his current staff that his orders are being treated like those of a president, not like suggestions.

On Monday, Trump also proclaimed himself unconcerned about the prospects of impeachment proceedings, which some Democrats are now calling for in the wake of Mueller's report.

"Not even a little bit," he said when asked about impeachment worries.