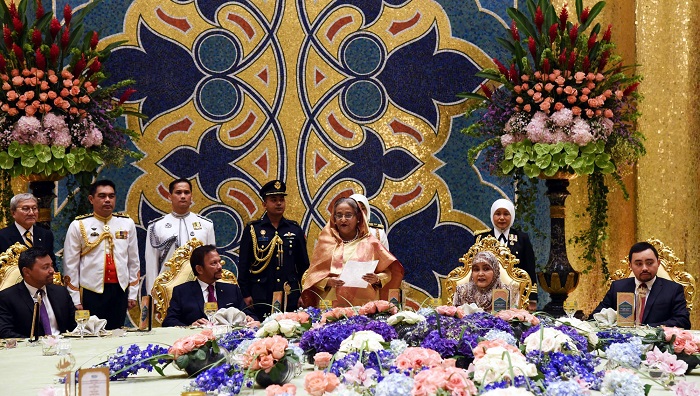 Prime Minister Sheikh Hasina on Monday said Bangladesh and Brunei are continuing to enjoy excellent relationship, which is solidly founded on many commonalities.

The premier came up with this observation while speaking at the banquet hosted in her honour by Sultan of Brunei Haji Hassanal Bolkiah at Royal Banquet Hall at Istana Nurul Iman, the official residence of the Sultan of Brunei.

Sheikh Hasina said that it was, indeed, gratifying for her to visit the great country, a true “Abode of Peace”- where pristine nature and centuries-old tradition embrace modernity.

She recalled memories of her brief visit to Brunei in early 1990s. At that time, her younger sister Sheikh Rehana, was residing in Brunei with her family.

The prime minister said that immediately after coming to office in 1996, she had taken an initiative to reopen Bangladesh’s resident mission in Brunei with a view to forging closer ties between the two countries.

“I am thankful to Your Majesty for opening the resident mission in Dhaka in 1999,” she added.

Sheikh Hasina said that her government is implementing series of comprehensive initiatives to materialize the cherished dream of “Sonar Bangla” of Father of the Nation Bangabandhu Sheikh Mujibur Rahman.

“Robust economic performance and growing investments in social sectors kept us well on track to become a middle-income country by 2021 and a developed one by 2041,” she said.

The prime minister said both countries agreed to work together to promote deeper cooperation between the two countries.

“We’ve identified a number of areas for collaboration and also witnessed conclusion of seven bilateral instruments in priority areas,” she added.

Sheikh Hasina said she had the privilege to attend a Business Forum where business communities from both countries had interactions to identify the potential areas of cooperation.

She invited Sultan Haji Hassanal Bolkiah to visit Bangladesh along with Her Majesty Duli Raja Isteri.

The sultan also expressed satisfaction over the existing bilateral relations between Brunei and Bangladesh. He hoped that with the visit of Sheikh Hasina, the relations between the two brotherly countries will reach a new height.

The banquet was followed by a colorful cultural function.