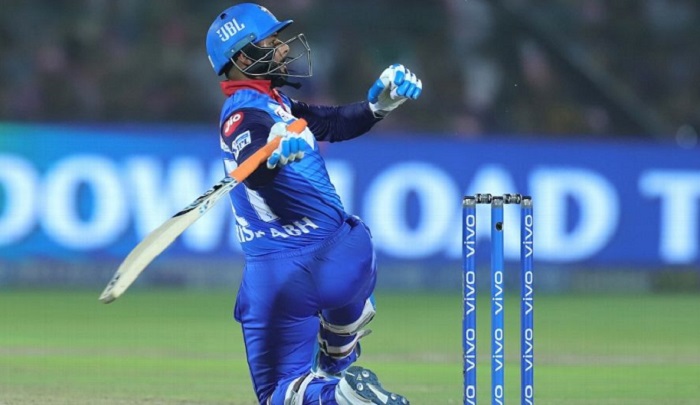 Ajinkya Rahane brought out his full repertoire of shots and then some uncharacteristic ones, charging to a second T20 century, but even his 105* off 63 couldn't carry Rajasthan Royals to a total that was safe from Delhi Capitals' powerful top order.

Shikhar Dhawan smashed 54 at two runs a ball, and Rishabh Pant shrugged off a run of low scores where he seemed to get himself out more than the bowlers. Pant came in at 77 for 2, with the required rate having crept over 10, and stayed till the end to steer the chase, smacking 78* off 36 balls that was full of one-handed slog-sweeps and stunningly timed sixes - including the winning hit in the final over.

The win meant Capitals moved to the top of the IPL 2019 points table, the first time the franchise from Delhi has attained that position in the second half of an IPL season since 2012. They are level on 14 points with Chennai Super Kings, but ahead on net run-rate.

Victory also put to bed the chasing jitters that had plagued Capitals. They have now won their last two matches while chasing. For Royals, defeat meant their chances of making it to the playoffs dwindled significantly, and they will most likely have to win each of their remaining four games to even be in contention for a spot.

Rahane's turbo charge after the drop

He had been involved in a mix-up with Sanju Samson that resulted in a run-out for Samson without facing a ball. He had looked like getting bogged down at the start. And he would have been on his way for 16 off 18 if Ishant Sharma had held on to the easiest of chances in the fifth over. Ishant clanged it, and from that point on, Rahane's innings was turbo-charged. The next 45 balls he faced would bring 89 runs, and that included the end phase when he was tiring, with only 11 runs coming off his last 10 deliveries. In the middle period of his innings, between the drop and the sluggish end, Rahane was scoring at an Andre Russell-ian run-rate of 13.37.

This was the avatar of Rahane that people had clamoured to see: aggression, innovation in shot-making and even the much-maligned 'intent'. His classical shot-making has always been a beautiful sight, but he married that with scoops, paddles and whips too. Most crucially perhaps, his mindset appeared to be one of attacking the bowlers.

Capitals pull it back at the death

After 13 overs, Royals were motoring at 135 for 1, with both Rahane and Steven Smith carting the bowlers around. The home side would have backed themselves to finish above 210 from there, but the last seven overs brought only 56 runs, with five wickets falling.

It began with Smith skying Axar Patel to the long-off boundary where Chris Morris held the ball over his head just inside the boundary line. Royals had Ben Stokes and Ashton Turner to follow, and would have expected a powerful finish. Instead, they fizzled out. Stokes' poor season with the bat continued, but even his returns looked massive when set against the unfortunate Turner, who got a third successive golden duck. Turner has now scored ducks in his last five consecutive T20 matches, four of which have been off the first ball.

Rahane had done all the running for his team and in an ideal world, he should have played second fiddle at the end with the big-hitters powering through. Instead, it was left to him to continue the power-hitting, and a tiring Rahane couldn't find the boundary as regularly as he had, and the ball wasn't going off the middle as often either. Capitals had kept the trio of Kagiso Rabada, Morris and Ishant for the end, and all three kept the batsmen relatively quiet, meaning Royals ended with a slightly below par total on a flat track.

Dhawan has reinvented himself as a T20 opener midway through this IPL season, and the new version of Dhawan ensured Capitals rocketed off at the start. That meant there was no run-rate pressure from the outset, and Dhawan's onslaught had given Capitals the dual cushion of allowing Prithvi Shaw the luxury to settle in, and not let the natural downturn when a wicket fell let the required rate climb too high. Dhawan didn't try to see off any bowler, or play himself in against anyone. He simply attacked each one, and won his battles against each one too. The spectre of dew later on forced Smith to bowl Shreyas Gopal in the Powerplay, but Dhawan carted him for 15 runs in his opening over to nullify his threat.

Pant walked in when Dhawan and Shreyas Iyer fell within eight balls. It was a delicate situation, which could have gone pear-shaped for Capitals if Pant had fallen. But with Shaw playing within himself to hold one end up, Pant opened up successfully. He didn't attempt extravagant shots at the start of his innings, which was perhaps the crucial difference from how his last few knocks had gone. But he didn't go into a shell either, which meant that by the time he was well set, he was already scoring at a rapid rate. Once set, he unleashed his full range. There are few bowling attacks in the world that can go unscathed against Pant in these situations, and Royals weren't one of them.