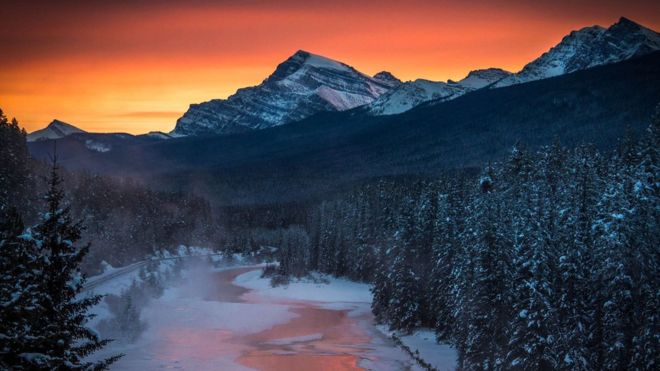 Three professional mountaineers have been found dead after an avalanche at Canada's Banff National Park.

Austrian climbers David Lama, 28, and Hansjörg Auer, 35, and US citizen Jess Roskelley, 36, had been attempting to climb the east face of Howse Peake.

The group were reported missing last Wednesday and later presumed dead, but recovery efforts were hampered by weather conditions.

The men were part of a team sponsored by outdoor clothing line North Face.

Canadian authorities said air rescuers had seen "signs of multiple avalanches" where they were found.

In a statement, Parks Canada said it "[extended its] sincere condolences to [the men's] families, friends and loved ones".

"We would also like to acknowledge the impact that this has had on the tight-knit, local and international climbing communities," it added.

During their expedition, the group had been taking a route up Howse Peake, known as M16, which has only been climbed once before.

All three were renowned within the mountaineering community.

Lama was part of a duo that carried out the first free ascent of Cerro Torre's Compressor route in Southern Patagonia.

In 2003, Mr Roskelly became the youngest American to climb Mount Everest - the world's highest peak - aged 20 at the time.

His father, John, was also a mountaineer and climbed Howse Peak via a different route in the 1970s.

"It's just one of those routes where you have to have the right conditions or it turns into a nightmare," he said in an interview last week with The Spokesman-Review newspaper.

"This is one of those trips where it turned into a nightmare."