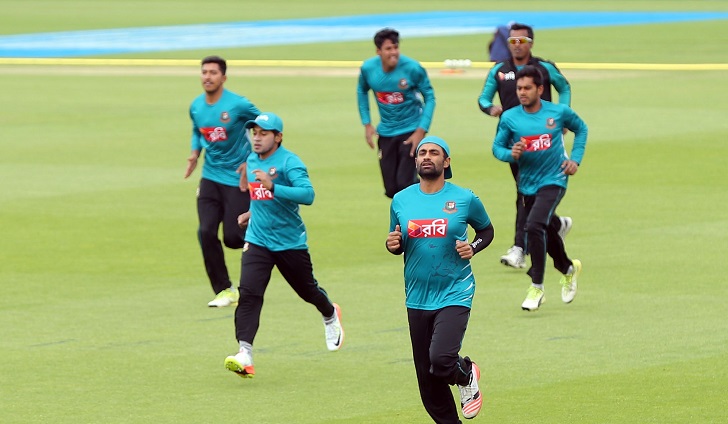 Bangladesh started off their World Cup preparation camp on Monday at Sher-e-Bangla National Cricket Stadium with only five players of the squad.

Most of the national players are busy with Dhaka Premier Division Cricket League which will end on April 23.

The players who were present at the camp on the first day are Mushfiqur Rahim, Tamim Iqbal, Mahmudullah Riyad, Rubel Hossain and Mustafizur Rahim. Most of them batted for more than 30 minutes each on the central wicket of Sher-e-Bangla.

Mohammad Saifuddin and Soumya Sarkar also came to the camp but they did not take part in any drill.

Meanwhile, Shakib Al Hasan, the star all-rounder, decided to stay back in India and take part in IPL. He is now set to back home before May 1.

Apart from Sunil Joshi, all of the other members of coaching staff were present at the camp. According to the current schedule, the camp will continue until April 29 with two rest days.

Tigers will then fly to Ireland to take part in a tri-series involving the hosts and West Indies. They will start their World Cup campaign on June 2 against South Africa.

Bangladesh Cricket Board announced the 15-member squad on April 16. Abu Jayed Rahi, the right-arm fast bowler, came as the lone surprise as the selectors decided Taskin Ahmed was not fit enough to play in the World Cup.

The selectors have included uncapped batsman Yasir Ali Rabbi and Nayeem Hasan for the tri-series in Ireland. They said that Yasir and Nayeem could get a chance in the World Cup team if they play well in Ireland.