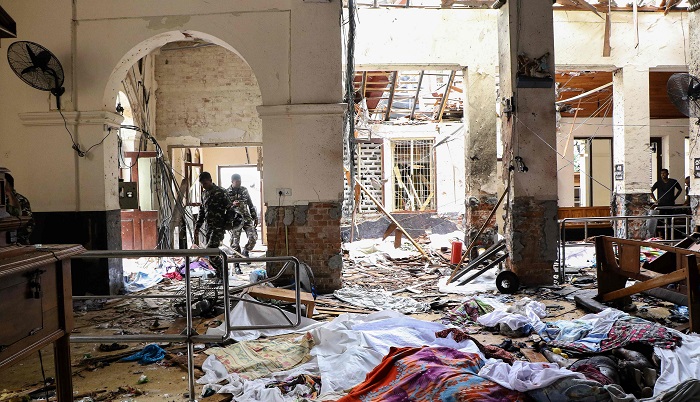 The Easter Sunday attacks on three churches in Sri Lanka mark a devastating escalation of violence against a Christian minority that has been targeted in the past, but never to such brutal and deadly effect.

Ethnic and religious violence has plagued Sri Lanka for decades, with a 37-year conflict with Tamil rebels that claimed 100,000 lives and an upswing in recent years in clashes between the Buddhist majority and Muslims.

While there have been attacks on Christians, their community had been left relatively unscathed, with anti-Muslim riots -- whipped up in part by hardline, right-wing Buddhists grabbing the headlines.

But that changed with Sunday's bombings on St Anthony's Shrine in Colombo, St Sebastian's in Negombo to the north of the capital and the church in the eastern city of Batticaloa.

All three were left in ruins, bodies slumped over pews or lined up in aisles, torn bibles strewn over the floor.

Along with attacks on four hotels, more than 200 people were killed.

The US State Department's most recent report on religious freedom said the National Christian Evangelical Alliance of Sri Lanka had documented "97 incidents" of attacks on churches, intimidation and violence in 2017.

Only around six percent of Sri Lanka's 20-million-strong population is Catholic.

Analysts say the harassment is longstanding and goes on.

"There is a long history of attacks on churches," said Alan Keenan, a Sri Lanka expert with the International Crisis Group, a monitoring body.

"There was one on a Methodist church last week, though nothing as massive as this case. It just does not get international attention."

Sunday's attacks were the worst acts of violence since the Tamil civil war that ended in 2009 and, during it's long history, saw numerous bombings and assassinations across the country.

Rucki Fernando, a human rights activist, said there have been regular cases of "local villagers or Buddhist monks intimidating a pastor or interrupting a prayer service."

"Sri Lankan governments have overlooked violence against religious minorities -- both Christians and Muslims -- that has been on the rise in recent years.

"But we have never seen anything of this scale or magnitude before."

Although no group has claimed responsibility for the bombings, a radical Muslim group named in the police alert, National Thowheeth Jama'ath, came to prominence last year when its followers were accused of vandalising Buddhist statues.

The group's secretary, Abdul Razik, was arrested in November on charges of inciting religious disharmony.

He was also detained in 2016 for comments about other religions.

Galagodaatte Gnanasara, head of a radical Buddhist group, the BSS, warned then of "a blood bath" unless Razik was arrested. Gnanasara has himself since served a jail term for intimidating the wife of a missing journalist.

Sunday's assault on Christian targets will only widen the sense of fear and uncertainty fuelled by the communal tensions.

"There is a lot of fear, not just in the Christian community but among everyone," said the activist Fernando.

Cardinal Malcolm Ranjith, archbishop of Colombo, said those behind the attacks should be punished "mercilessly".

"Only animals can behave like that," he told reporters.