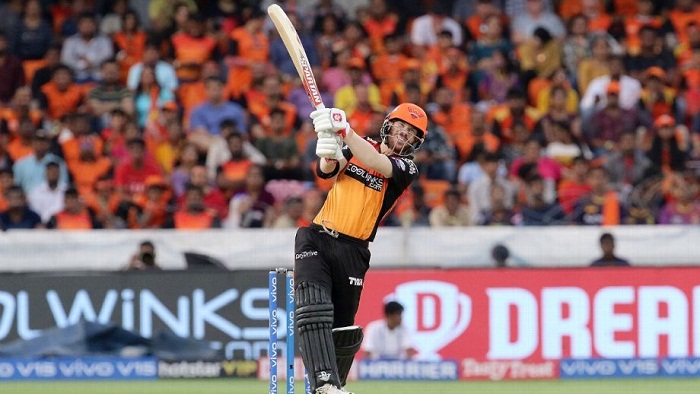 Jonny Bairstow and David Warner continued their stellar run at the top as they powered Sunrisers Hyderbad to a nine-wicket win over struggling Kolkata Knight Riders in an IPL encounter in Hyderabad.

Chasing a target of 160, Warner struck 67 off 38 balls hitting three fours and five sixes while Englishman Bairstow punished the hapless KKR attack with seven boundaries and four maximums in his unbeaten knock of 80 off 43 balls.

The openers looked in command as the target was achieved in 15 overs largely due to their 131-run stand. This was KKR’s fifth successive loss in the tournament.

This is the fourth time that the opening partnership of Warner and Bairstow paved the way for a Sunrisers victory this season. The duo had guided SRH to victories against Rajasthan Royals, Royal Challengers Bangalore and Delhi Capitals in similar fashion.

KKR were sloppy in the field and ended up paying heavily for their mistakes. Bairstow was dropped twice, once on 5 by Cariappa off debutant Prithviraj’s delivery in the second over and then again on 58 by Piyush Chawla off Sunil Narine.

The troika of spinners were the reason for KKR’s downfall as Sunil Narine (0/34 in 4 overs), KC Cariappa (0/34 in 2 overs) and Piyush Chawla (0/38 in 3 overs) gave away 106 runs in nine overs. Chinaman Kuldeep Yadav was dropped from the playing XI.

Prithvi (1/29) got the only breakthrough for KKR dismissing the threatening Australian but it was a little too late as the hosts needed just 29 runs off 40 balls.

With Warner gone, Kane Williamson (8 off 9 balls) walked in but the captain had little to do with Bairstow hitting a four and two sixes to seal the victory.

Earlier, young left-arm pacer Khaleel Ahmed grabbed three wickets in an impressive spell. The 21-year-old speedster removed Sunil Narine (25 off 7 balls), who was looking dangerous in his first spell and then came back to dismiss Shubman Gill (3) and Chris Lynn (51) in his corresponding spells to keep KKR in check.

Senior pacer Bhuvneshwar Kumar returned with the figures of 2/35 while leg-spinner Rashid Khan (1/23) and seamer Sandeep Sharma (1/37) took a wicket apiece with the Sunrisers’ bowlers making life difficult for the KKR batsmen.

For KKR, Lynn was the top-scored with a dogged 47-ball 51. Rinku Singh was the other notable contributer with a 25-ball 30.

Put in to bat, Lynn and Sunil Narine took the opposition to the cleaners. Both openers hitting boundaries of their first balls. The duo quickly stitched a 42-run partnership before Ahmed dismissed Narine in the third over.

Narine’s blistering innings of 24 runs off eight balls was laced with three boundaries and two maximums.

With the wicket of Narine, the momentum shifted in SRH’s favour. In Khaleel’s next over, he dismissed Gill (3). Nitish Rana (11) and captain Dinesh Karthik (6) also returned to the dressing room in quick succession.

Rinku and Lynn shared a 51-run stand for the fifth wicket to stabilise the innings before Sandeep Sharma dismissed the 21-year-old Indian. Big-hitter Andre Russel scored 15 off 9 balls.

He hit two sixes off Kumar before the right-arm seamer dismissed the Jamaican in the penultimate over.