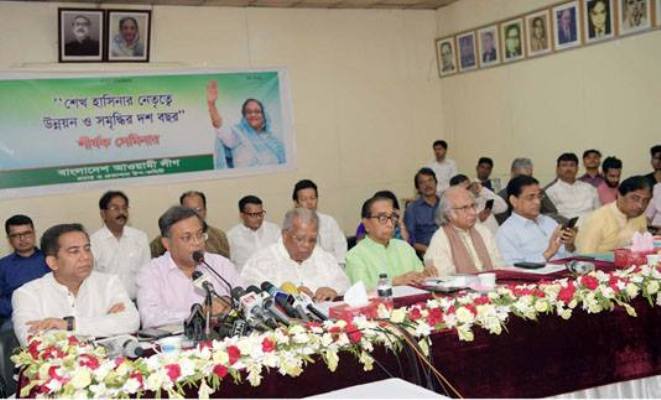 Awami League Advisory Council Member and veteran politician Amir Hossain Amu, MP, on Sunday said Bangladesh has already reached at a new stage of development with the rural economy becoming stronger compared to any time before.

“We should work together to take Bangladesh to a new height,” he told a seminar at an auditorium of Institution of Engineers, Bangladesh (IEB) in the capital.

Awami League Publicity and Publication Sub Committee organized the seminar titled, ‘The ten years of development and progress under the leadership of Sheikh Hasina’ with committee chairman and prime minister’s Political Advisor HT Imam in the chair.

Amu said Prime Minister Sheikh Hasina is working to materialize the ‘Sonar Bangla’ of the dream of Father of the Nation Bangabandhu Sheikh Mujibur Rahman.

“After assuming office, the premier is working relentlessly to fulfill the cent percent basic needs of the common people. She has taken the country to a new stage and now Bangladesh is a role model before the world community,” he added.

The AL senior leader said the government has taken different mega projects like Padma Bridge with its own fund.

Dr Hasan said a huge change has taken place in every sector of society. “The touch of development is everywhere in rural and urban areas and it has been possible only for the dynamic leadership of Prime Minister Sheikh Hasina,” he added.

He said once a food deficient country, Bangladesh is now a food exporting country though it is one of the most densely populated countries in the globe.

Dr Hasan said the country became one of the top five countries of the world in GDP growth under the leadership of Sheikh Hasina. The country has emerged as a perfect example of development before the world community, he added.

The minister said Bangladesh has witnessed a considerable progress as the present government implemented many development programmes in the past 10 years.

Many world leaders are lauding Bangladesh for its remarkable advancements in different socio-economic indicators achieved in the past 10 years, he said, adding Bangladesh has exceeded India and Pakistan in many key indicators.

“We want constructive criticisms of the mistakes of the government. But blind criticism is undesirable,” Dr Hasan said, adding that the country’s progress now appeared indomitable under the Prime Minister Sheikh Hasina’s dynamic leadership.

Earlier, a book containing with different development works and projects of the Awami League government was unveiled.