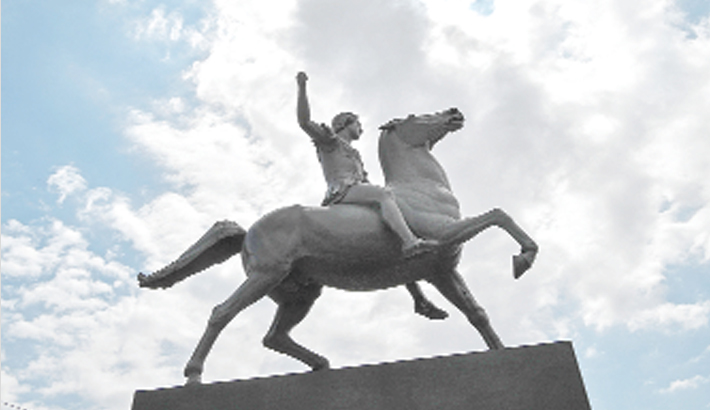 The 3,50-metre (11.5-foot) equestrian statue of a young Alexander, cast in bronze, was erected in central Athens opposite a statue of Lord Byron.

According to the city of Athens, it was completed in 1972 and acquired by the state in 1992, at a time of intense nationalist feeling over a bitter name dispute with the newly-independent former Yugoslav Republic of Macedonia.

Athens Mayor Giorgos Kaminis insisted Friday the move had “nothing” to do with the Macedonia dispute.

“The decision to erect the statue was taken in 2015. This is a mark of the delays of Greek bureaucracy,” Kaminis told AFP.

The fourth-century BC warrior king, born in today’s northern Greek region of Macedonia, is a hero figure to Greeks. For decades, Athens accused Skopje of seeking to usurp its ancient heritage.

Until now, there had also been no agreement in Athens on where to place the statue.

A decade ago, a nationalist government in Skopje launched an initiative to erect its own statues to Alexander and his father Philip.

In February, the former Yugoslav republic was officially renamed North Macedonia following a landmark deal with the leftist government in Greece that ended the three-decade dispute.

Earlier this month, North Macedonia renamed its main football stadium, formerly known as Philip II arena, after the father of Alexander the Great.

Skopje in recent months has also dropped Alexander the Great from the name of an airport and a highway.