Trial of War Criminals Must Continue 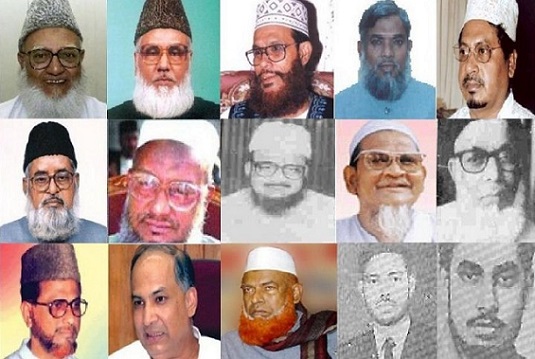 The International Crimes Tribunal (ICT)-1 bench led by Justice Shahinur Islam announced the latest verdict of death punishment in the case over 1971 war crimes in Netrokona’s Purbadhala on 28 March last. The five fugitives accused in the case are Sheikh Md Abdul Majid aka Majid Maulana, 66, Md Abdul Khalek Talukdar, 67, Md Kabir Khan, 70, Abdus Salam Beg, 68 and Nuruddin, 70.They are accused of participating in seven incidents that involved of murder, rape, kidnapping, torture, looting and other atrocities during Bangladesh’s Liberation War in 1971.

The ICT of Bangladesh was set up on 25 March 2010. Nine years have already gone away after its birth, but it has carried forward its obligations successfully regardless of, in defiance of many hindrances.

Hail, International Crimes Tribunals of Bangladesh, hail to them!

The war criminals slaughtered our freedom-loving innocent people in 1971 pronouncing the holy words, “Narayetakbir, Allahuakbar. Pakistan Zindabad. Pakistan is the holy place of Islam.” They did never allow those slain bodies for burial. Instead, they allowed those dead bodies to be eaten by the jackals, vultures, dogs and many other human flesh eaters. Hence, their temerity is irremissible.

People of Bangladesh and the government are driven by a single purpose i.e. to establish justice to the worst war criminals. It is not “avenge, revenge or cobra bite” as has been propagating by the mango-twigs of the war criminals of 1971. The war criminals have rightly been tracked to prosecute who have evaded justice for decades. It is a mission. It is not wise and humane to let such matters rest without a harsh challenge.

It has taken us about four decades to bring some of the king pin war criminals to justice. By this long time, many people died, and some of the best cases could not be brought to justice. It was a real tragedy in all respects. Between 2010 and now, many war criminals have been tried and convicted; some of them were hanged for their unspeakable barbarities.

Md. Mujibur Rahman (now Editor, The Weekly Postcard) and one of the first batch trained guerrilla freedom fighters from the renowned Dehradun Military Academy says, “If you allow people who have committed terrible crimes to live in your midst without taking legal action against them, you are basically saying it doesn’t matter.”

Some people deliberately and some unknowingly try to say very often so many years have passed away, the suspects themselves are probably sorry. But this is more wishful thinking on their part than actual reality. But the truth is that they have never expressed regret or remorse for the grave atrocities they committed to the freedom loving people of Bangladesh during our glorious Liberation War in 1971.

If we can’t bring these culprits to justice, we feel we are betraying with our fallen heroes and their families. We are leaving them in the pits. But it is prosecution that has the greatest impact in terms of helping a society face its past. The war criminals against which trials are continuing in connection with a massacre that wiped out three million of our population. And we should never say, you will remain off the hook. Hence, the hunt for the war criminals must go on.

These criminals as we find they had a lack of tolerance for people who did not fall in their support, not to speak of people of any religion. It is a million dollar question how one has to deal with the numerous obstacles obstructing justice and the frustrations of seeing so many war criminals of our 1971 history who committed terrible crimes and whom we were finally able to track down and expose, escape trial and punishment due to lack of political will or because of illness and/or death.

In a world in which most countries prefer to let elderly perpetrators die in peace and tranquility, knowing full well that all they have to do to avoid prosecutions is drag out the legal procedures until such time as the criminals become medically unfit or pass away.

Our response to such questions is to emphasise the tremendous suffering inflicted on the victims of mass murders by these criminals.

One of the most important cases is that of notorious Matiur Rahman Nizami, the supremo of Al-Badr force, a deadly killing outfit belonged to Jamaat-e-Islami, a criminal organisation. Under his leadership, so many concentration camps were set up in many parts of Bangladesh during our Independence War in 1971. Each and every camp was notorious for the cruelty of Nizami and his accomplices who routinely tortured the inmates and invented unique murder methods to increase the suffering of the victims.

The tribunal court awarded capital punishment to this infamous butcher. The country’s apex court has upheld his death punishment. Review petition was duly heard in the Supreme Court (SC) on May 3, 2016 and the final verdict has also been delivered to seal the fate of this dreaded war criminal to go to the hangman’s noose. And he was executed by rights.

It is, therefore, with great trepidation that the people of Bangladesh were waiting to hear the final judgment of SC. Valiant freedom fighter Syed Hafizul Hoque reminds us, “The obligation we owe the victims, the responsibility to make a serious effort to track down those who turned so many innocent men, women, and children into victims, simply because they were classified as enemies of Jamaat-e-Islam, other religion trade based political parties and their notorious Pakistan.”

The words and gratitude of freedom fighters underscore for us one of the main motivations to keep trying to bring the 1971 war criminals to justice. So when the going gets rough, and the frustrations mount, we should think back to the words of the aforesaid veteran freedom fighters and remember that one of the greatest good deeds a Bengali can do is to fulfill that obligation to as many of the victims as possible.

The wheels of justice for the victims of the war criminals’ crimes move in a zigzag way and at a frustratingly slow pace, even at this late date in time, when every day that passes can spell the difference between a perpetrator being convicted and punished and cases being dropped for reasons of death while trials were going on and death penalties to some accused were commuted on physical or mental infirmities.

In the meantime, all we can do is hope that the country’s highest court keeps the earlier verdict unaltered in cases of many war criminals now lying pending with them, and in that respect, every moment counts.

For us who saw the 1971 struggle of our proud history, the genocide of three million of our people is a living memory, not only because survivors of that tragedy, our parents, uncles and aunts, are still among us to testify and remind us of the horrors that they survived, but also because of our more recent history that some foreign and local mango-twigs of the war criminals are out to save them from the hangmen’s nooses, and that we remain the target of genocidal threats.

The arrest in Germany of three men aged 88, 92 and 94, who served as guards at the Auschwitz-Birkenau death camp during the World War II, has once again raised the issue of the ongoing prosecution of elderly Holocaust perpetrators, almost seven decades after the end of World War II. Why shall we then consider age, health ground and so on in case of the 1971 war criminals of Bangladesh?

The question of trying the war criminals of 1971 massacre is not new and has been an issue for many years, since elderly Nazis and collaborators have been brought to justice ever since the World War II ended. What is new, however, is the age of the men currently in detention, as well as other Nazi war criminals who have been investigated and/or prosecuted during the past decade or so, who have been considerably older than those brought to justice in previous decades.

Thus the moral, legal and philosophical arguments for continued prosecution of Bangladesh’s war criminals remain the same. The passage of time in no way diminishes the guilt of the killers. If a person committed murder many years ago and has still not been held accountable, he or she is no less guilty today, just because many years have passed since the crime was committed. Old age should not afford protection to murderers. Reaching an advanced age does not turn a murderer into a righteous person. Every one of the 1971 victims deserves that an effort be made to find the persons who turned them - innocent men, women, and children - into victims.

The ongoing efforts to bring more war criminals to justice sends a powerful message, that if one commits such heinous crimes, even decades later the search to hold such persons accountable continues. In this regard, the fact that so many of those who perpetrated the colossal crimes in Bangladesh in 1971 were able to escape punishment only made it easier for subsequent tragedies to occur. It must be as clear as possible, that committing such crimes will almost certainly result in swift and severe punishment.

Trials of Bangladesh’s war criminals continue to prove helpful in the fight against genocide denial and the recent efforts, primarily to rewrite the narrative of our glorious Liberation War by some ‘nengtyidurs’ (mice) to hide or minimise the role of local collaborators in genocidal crimes.

It is important to note that a single perpetrator has never expressed any regret or remorse. It is just the opposite, they are still proud to this day of the crimes they committed. Hence, time after time to remind the skeptics, that the criminals being brought to justice are the last people on earth who deserve no sympathy since they had no mercy on their innocent victims, some of whom were even older than they are today.

So when you see one of these deadly war criminals in print or electronic media, don’t be taken in by their frail, sickly or saintly appearance. Think of them as they were in the prime of their youth and physical strength, when they devoted all their energy to helping run the largest mass murder factory in the history of mankind. Thus the trial for the war criminals must carry on. And they must walk to the gallows.