Trump speaks with Libya warlord Haftar in sign of support 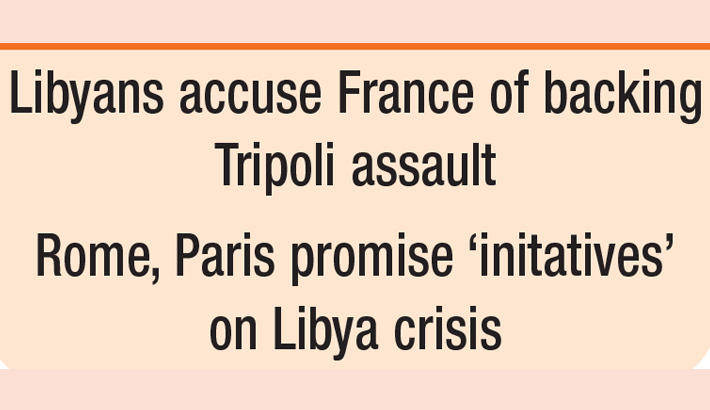 Observers see Trump’s words of praise for the strongman, at the expense of internationally-recognized leader Fayez al-Sarraj, as evidence of US support that explains Haftar’s determination to pursue his offensive to seize Tripoli.

Trump and Haftar spoke on Monday “to discuss ongoing counterterrorism efforts and the need to achieve peace and stability in Libya,” according to the White House.

The White House did not say why it delayed giving news of the phone call.

Haftar, seen by his allies Egypt and the United Arab Emirates as a bulwark against Islamists, has declared he wants to seize the capital, now controlled by a UN-recognized government and an array of militias.

The military commander backs a rival administration based in eastern Libya that is refusing to recognize the Tripoli government’s authority.

On Thursday, Russia and the United States opposed a British bid backed by France and Germany at the UN Security Council to demand a ceasefire in Libya.

Russia insisted on having no criticism of Haftar in the proposed resolution, while the United States said it wanted more time to consider the situation.

Meanwhile, hundreds of “yellow vest” protesters on Friday demonstrated in Tripoli against an offensive by military strongman Khalifa Haftar on the Libyan capital and accused France of backing him.

Wearing the trademark yellow vests of French anti-government demonstrators, they were among thousands of Libyans who flooded a central Tripoli square to rally in support of the internationally-recognised Government of National Accord (GNA).

“We are surprised by France’s conduct in the face of the Tripoli attack,” read a sign held up by the demonstrators.

On the other hand, France and Italy will work on “initiatives” for Libya as there is no military solution to the crisis, the countries’ foreign ministers said on Friday.

The pledge came as the attempted offensive by Libyan strongman Khalifa Haftar on Tripoli has thrown into sharp relief the divisions between world powers over how to end the chaos that has riven Libya since the 2011 overthrow of Moamer Kadhafi.

“There is no military solution to solve the complex political issues in Libya,” Italian Foreign Minister Enzo Moavero Milanesi told reporters after a meeting with his French counterpart Jean-Yves Le Drian.

“The crisis could become dangerous... (because) the elements of a deterioration are there,” Le Drian warned.

France and Italy, Libya’s former colonial power, are therefore working closely on the issue because “there can be no progress in Libya without a solid Franco-Italian agreement”, he said.

He added that recent difficulties between Rome and Paris were now “behind us”.

The two foreign ministers promised “initiatives” on the Libyan situation although they did not give details, adding that a top-level meeting of French and Italian diplomats and other countries with a direct interest in the Libyan crisis would take place soon.