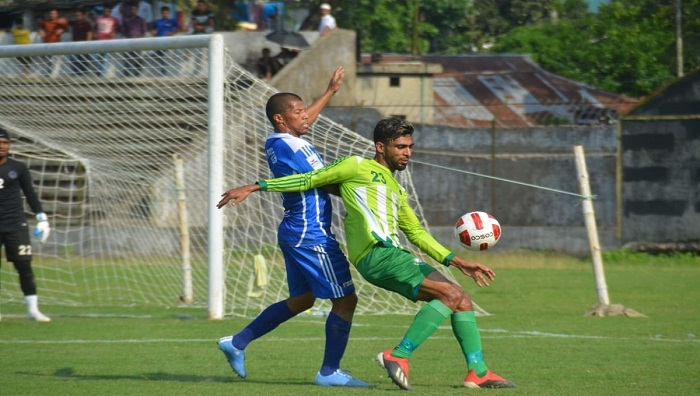 On the other hand Brothers Union Ltd. completed the first phase with their 2nd victory in the league stunning top ranking Arambagh KS also by 1-0 goal at Rafiq Uddin Bhuiyan Stadium in Mymensingh on Saturday.

After the first phase of BPL, Sheikh Russel were in the 3rd slot in the league table after league leader Bashundhara Kings (34 points) and holders Dhaka Abahani Limited (30 points) securing 27 points from 12 matches with 8 wins, 3 draws and one defeat.

Despite the day’s defeat, Arambagh KS finished 5th with 19 points in 12 matches with 6 wins, on draw and 5 losses, Brother Union were placed 11th with eight points while Team BJMC finished bottom with four points from 12 matches. Traditional Dhaka Mohammedan were in the 12th slot with six points

In Noakhali, Sheikh Russel sweated out for the victory against Team BJMC. Sheikh Russel attackers started their dominations from the beginning, but hadn’t got any success.

In the 43rd minute of the match, Brazilian striker Alex Rafael scored the match winner for Sheikh Russel KC (1-0).

In the day’s another match, Brothers Union stunned the 5th-placed Arambagh KS beating them by 1-0 goal in Mymensingh.

After a goalless first half, Brazilian attacker Everton Souza Santos netted the match decider for the Gopibagh outfit in the 77th minute. Later, Arambagh KS tried hard to come in the match, but failed.