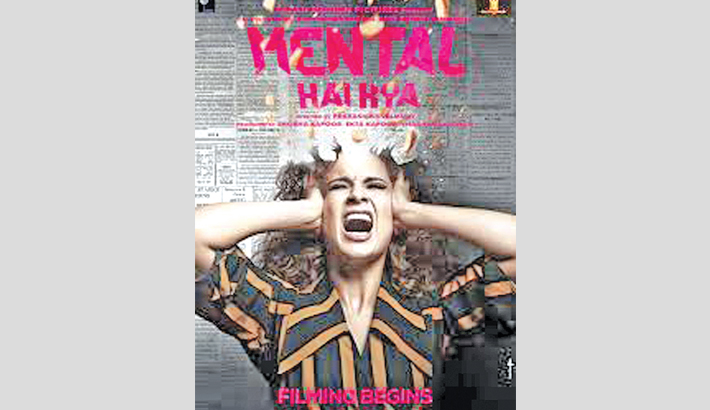 The film industry must exercise caution and be more sensitive in its messaging, irate psychiatrists have said in reference to the title and posters of the upcoming Hindi film Mental Hai Kya?, featuring popular actors Rajkummar Rao and Kangana Ranaut, reports Mid-day.

Experts across the country aren’t the least amused with the title and a newly-released poster which depicts the artistes trying to balance a razor sharp blade between their tongues.

Taking their ire a step further, the Indian Psychiatric Society (IPS) on Thursday wrote to the Central Board of Film Certification (CBFC), raising “serious objections” to the film’s title.

“We take serious objections to the title of the movie, which is discriminative, stigmatising, degrading and inhuman in projecting mental disorders and persons who suffer mental disorders. We strongly demand the title to be removed with immediate effect preventing further damage to the modesty of mental health service users,” read the letter.

The IPS demanded that the CBFC censor any sequence in the movie that is violating the rights of people with mental disorders.

The poster of the movie, produced by Shobha Kapoor, Ekta Kapoor and Shailesh Singh, written by Kanika Dhillon and directed by Prakash Kovelmudi, was launched recently with the caption: “Get ready for the craziness that cuts through!”

A motion poster further reads: “This June, witness two mentals collide”, before breaking into a montage of images with the words “crazy, bizarre, crack, freaky, whacky, gutsy, weirdo, psycho”. The images showcase Kangana making a cross-eyed face while Rajkummar shows his two middle fingers, Kangana with a matchstick on her tongue while Rajkummar stubs a cigarette on his forehead... so on and so forth.

Samir Parikh, Director, Department of Behavioural Sciences and Mental Health, Fortis Healthcare, expressed dismay about how on the one hand, a leading Bollywood actress like Deepika Padukone mustered the courage to talk about her tryst with mental health issues and encouraged people to talk about it, while on the other hand, here’s a film like Mental Hai Kya?.

“I have started a mental health curriculum, as part of which the idea is to tell children and teachers in schools, about the importance of the right conversation about mental health in public. It plays a huge part in developing a perception about those fighting a mental health issue,” Parikh told IANS.