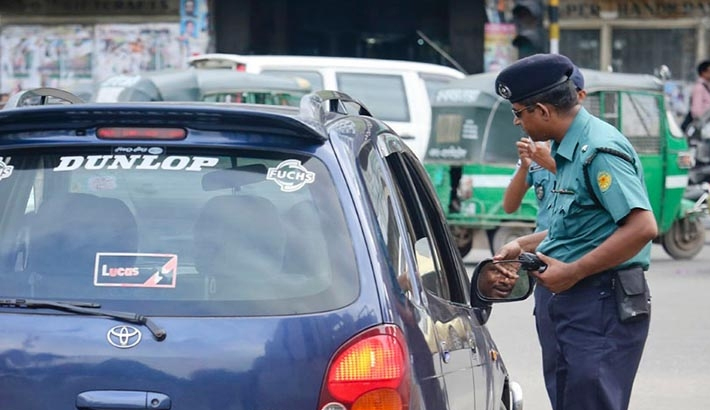 Almost half of the traffic police personnel stationed in the capital are suffering from breathing and hearing difficulties due to air and noise pollution, according to doctors at Central Police Hospital.

“Although we don’t have any exact figure, we guess almost half of the traffic personnel, particularly the constables, are suffering from such health problems,” Dr Farhana Islam said.

She said prolonged exposure to noise pollution is also affecting the quality of their sleep and physiological health.

Around 3,500 traffic police personnel are stationed in Dhaka, according to the Traffic Division of Dhaka Metropolitan Police (DMP).

FA Hasan, medical officer at the hospital, said the traffic police members should wear earplugs to protect themselves from sound pollution.

An earplug is a device that is inserted into the ear canal to protect the user’s ears from loud noises, intrusion of water, and dust or excessive wind.

Bimod, a traffic police constable who was on-duty in Karwan Bazar crossing, said, “I’ve difficulty in sleeping at night. I’m now accustomed to talking loudly even in my house. I’ve trouble hearing as well.”

He said many of his colleagues are facing the same problem.

Parves, a traffic sergeant stationed in Farmgate, said heart, hearing and breathing problems are common among their colleagues.

Sergeant Shajahan, who was on-duty in city’s Badda, echoed the views of Bimod and Parves.

Assistant Professor of Bangladesh University of Engineering Technology (BUET) Saifun Newaz said the traffic police personnel should be provided with protective devices to protect them from sound and air pollution.

Flexibility should be brought to their uniforms, he said.

Mir Rezaul Alam, additional commissioner (traffic), of DMP could not be reached for comment despite several attempts over phone.

He also said the use of earplug may hamper the traffic police’s attention to traffic situation.