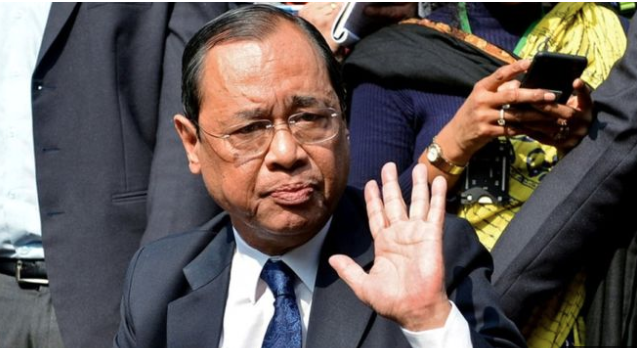 The 35-year-old woman has filed an affidavit alleging two instances of misconduct in October last year, shortly after  Gogoi was appointed.

She says her family was victimised after she refused the advances.

A statement said  Gogoi, 64, "totally denied" the "false and scurrilous" accusations. He has labelled them an attempt to "destabilise the judiciary".

What does the woman allege?

The allegations were filed in a sworn affidavit that has been sent to Supreme Court judges.

In it the married woman, who cannot be named under Indian law, alleges the misconduct occurred on 10 and 11 October at the offices in Mr Gogoi's residence.

She alleges Gogoi "hugged me around the waist, and touched me all over my body with his arms" and pressed his body against her.

When he did not stop, she says she "was forced to push him away from me with my hands".

The woman says  Gogoi then told her not to mention what had happened or her family "would be greatly disturbed".

The woman alleges she was transferred three times, then fired in December. She says her husband and brother were both suspended from their jobs.

In March a resident of the city of Jhajjar filed a complaint alleging she had kept money she had taken as a bribe to get him a job at the court.

She denies the accusation and says she attended a police station with family members in March where they were subjected to abusive treatment.

"It now seems like the harassment, victimisation, and torture will not stop unless I speak out about the origin and motive for the harassment," she alleges in the affidavit.

What has  Gogoi said?

The first response came in a statement from the secretary general of the Supreme Court on the chief justice's behalf.

It says the allegations are "completely and absolutely false and scurrilous and are totally denied".

It says the woman "had no occasion to interact directly with the chief justice".

The statement refers to the criminal case of bribery lodged against the woman, saying: "It appears that these false allegations are being made as a pressure tactic to somehow come out of the various proceedings which have been initiated in law."

It says the employee was dismissed "as per procedure" after an incident of "inappropriate conduct".

Gogoi himself addressed the issue in front of a special bench of the Supreme Court on Saturday.

"I don't want to stoop so low as to answer these charges," he said. "All employees of the Supreme Court are treated respectfully by me."

He added: "There are forces that are trying to destabilise the judiciary. There are bigger forces behind these allegations hurled at me."