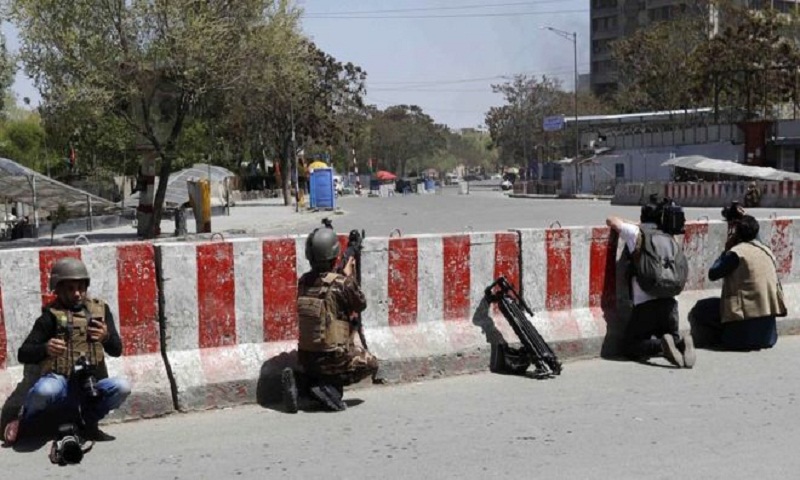 An explosion and gunfire have been heard in the centre of the Afghan capital Kabul near the ministry of information.

A ministry source told the BBC that there were three attackers, one of whom managed to get inside the building.

No group has yet said it carried out the attack, but it follows the suspension of talks between the government and Taliban insurgents.

The blast happened in a busy area of central Kabul, near one of the city's most popular hotels, a couple of other ministries, and the presidential palace.

Another of the attackers detonated his explosives at the boundary wall, and the third was shot dead by police.

The Serena Hotel, which is heavily fortified, is one of the few still used by foreign visitors.

At 18 storeys high, the information ministry building is believed to be one of the tallest in Kabul.

Footage broadcast on local TV showed a small cloud of smoke rising near the tower block, while people tried to climb out of the windows of one of the lower levels, AFP news agency reported.

Hundreds of civilians had been evacuated from the building, the ministry said.

The area has now been cordoned off by security forces.

Although Kabul still sees heavy fighting, this comes after months of relative calm in the city.

The attack has happened amid talks between the US and the Taliban, which aim to negotiate a peace process in the country.

A conference between officials from the militant group and about 250 Afghan politicians had been due to take place in the Qatari capital Doha on 20 and 21 April.

But the meeting was abruptly called off on Thursday after the Taliban complained about the size and status of the Afghan delegation.