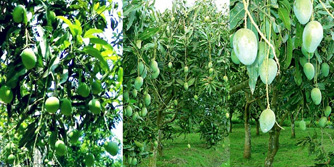 Farmers and officials of the Department of Agriculture Extension (DAE) are expecting bumper mango output following smooth formation of the tender fruits in Rangpur agriculture region this season.

The process of tender mango formation continues smoothly predicting bumper production of the most popular fruits this season.

The DAE officials said the fruit setting stage is progressing superbly amid favorable climatic condition and mango trees are wearing eye-catching looks in orchards and homesteads all over the region.

Meanwhile, farmers have engaged maximum efforts in nursing their growing tender mangoes in all five districts of Rangpur, Gaibandha, Kurigram, Lalmonirhat and Nilphamari in the region.

Talking to BSS, farmer Azizar Rahman of village Sankarpur Mistripara of Badarganj upazila here said tender mangoes are growing fabulously in his orchard on 3.50 acres where he has been cultivating the fruit for last 12 years.

“I have cultivated 14 varieties of high yielding and popular varieties of mango like ‘Haribhanga’, ‘Gourmoti’, BARI-4, Banana mango, ‘Chandramollika’, Gopalbhog, Khirshapati’ and other varieties,” he said.

Excluding farming costs of around Taka three-lakh in cultivating mango on his orchard, he earns a net profit of Taka 10 lakh on an average annually by selling matured mangoes to bigger traders.

Farmer Mukul Shah of village Chand Kuthirdanga in Badarganj upazila said he has been cultivating highly tasty, popular, fibreless and local indigenous variety of ‘Haribhanga’ mango on his orchards on 12 acres of land for last 12 years.

“The tender mangoes are growing excellent in the trees and I am expecting a bumper production of the fruit this session from my orchard,” he said.

“I hope to earn a net profits of Taka 16 lakh by selling mangoes from my orchard by June next this year like in previous seasons excluding farming costs of Taka five-lakh on an average,” Shah added.

Farmer Jahangir Alam of village Jarullapur Bakultola in Mithapukur upazila here said he has cultivated ‘Haribhanga’ mango in his orchard on eight acres of land this year like in the previous 10 years.

“The fruit setting period is continuing superbly predicting a bumper production of the fruit this season,” he said and hoped to earn a net profit of around Taka 10 lakh excluding all farming expenditure.

Farmer Abdul Halim of Rangatipara village in Mithapukur upazila said he has been cultivating highly profitable ‘Hatibandha’ mango successfully in his orchard on 9.50 acres of land for last 10 years.

“Like in previous seasons, I hope to earn a net profit of Taka 12 lakh excluding farming cost after selling the produced mango in May and June next as tender fruits are now growing superbly,” Halim added.

Talking to BSS today, Horticulture Specialist of the DAE at its regional office Khondker Md. Mesbahul Islam said around 95 percent of mango trees bloomed this season and the fruit setting process continues well in all five districts of the region.

“The farmers cultivated mango on 7,122 hectares of land producing 83,764 tonnes of the fruit worth Taka 335 crore last year in the region,” he said.

However, 7,350 hectares of land have been brought under mango cultivation this season in the region where farmers are expanding its commercial basis farming after getting repeated bumper production with lucrative price in recent years

“The field level agriculture officials are assisting farmers to properly nursing their orchards and controlling pests’ attacks, if any, like weevil, mango hopper and fruit fly during this fruit formation period for better production,” he said.

Deputy Director of the DAE at its regional office Md Moniruzzaman said farmers are taking extensive care so that tender mangoes could grow well in huge quantity to bring huge profits to them.