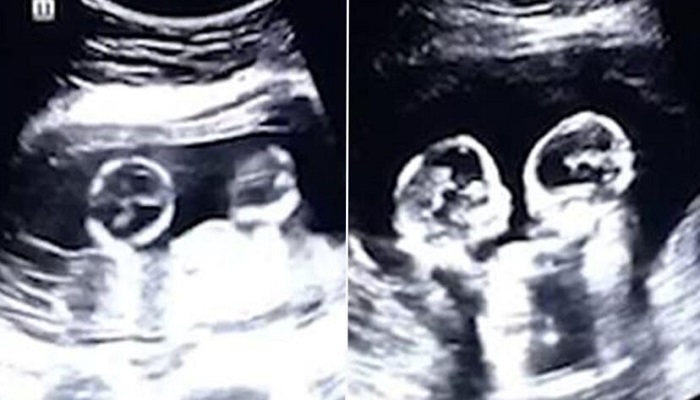 All sisters know arguing is pretty much part of the course of sisterhood. As much as you love each other, a ‘borrowed’ toy – and later on a pinched hair curler – can result in a screaming match unlike any other.

One pair of twin sisters from China couldn’t even wait to exit the womb to have a good bicker, looking set to bring a heap of drama into their parents’ lives.

During their mother’s four month ultrasound, this lively set of identical twins were spotted kicking and punching each other, no doubt already blaming each other for starting it.

The video has since gone viral, bringing a smile to the faces of anyone who’s ever raised confrontational siblings.

Their father, 28-year-old Mr Tao, has also been deeply amused by his cheeky daughters’ antics, telling China Daily how they appeared to be ‘boxing with each other for a few rounds’.

Luckily, it isn’t all competitiveness between these girls, with Mr Tao noting how he’d also spotted them sharing a sweet hug during another an amniotic sac test:

'We were so touched. The babies were so small and they knew how to look after each other. I believe they will live with each other in harmony when they grow up.'

The girls shared the same amniotic sac and placenta while in the womb, making them very rare indeed. Known as monoamniotic twins – or Mo-Mo – twins, these types of twins only occur in around one in 35,000 to one in 60,000 pregnancies.

The sisters have since been delivered via C-section, and given the sweet nicknames ‘Strawberry’ and ‘Cherry’ after their mum ate lots of these fruits during her pregnancy.

They’re both said to be in a stable condition, despite the risks Mo-Mo pregnancies can be bring.

The babies have been born safe and sound. It’s their parents’ fortune as well as my fortune. They are the first pair of Mo-Mo twins our hospital has successfully delivered.