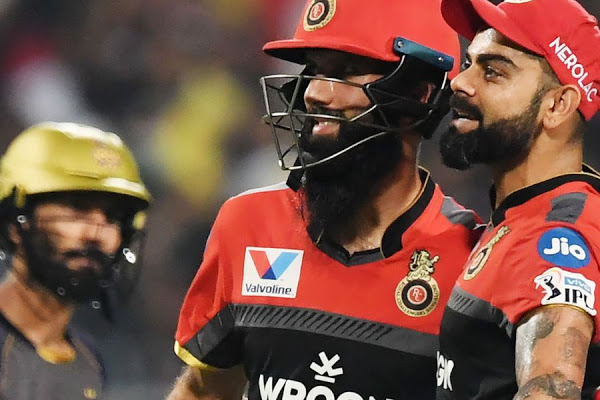 Virat Kohli scored his first IPL century of the year, then paid tribute Saturday to Royal Challengers Bangalore teammate Moeen Ali for setting up a crucial second win of the season.

"Moeen changed the game completely and that allowed me to play my game," said the India captain, who completed his 100 on the penultimate ball of the Bangalore innings against Kolkata Knight Riders.

With Bangalore needing to up the run rate, Moeen hit the second ball he faced off left-arm wrist spinner Kuldeep Yadav into the long-on stands for six.

In the 16th over, he hit Kuldeep -- who he will have to face in the World Cup in June -- for three sixes and two fours. Kuldeep then dismissed his rival with the last ball of the over.

Bangalore were suffering with veteran South African star AB de Villiers rested because of illness but through Kohli and Moeen made an impressive 213-4 off their 20 overs.

No team has ever successfully chased a target this big at Kolkata's Eden Gardens, and the Knight Riders got to only 203-5.

Nitish Rana made an unbeaten 85 while Andre Russell hit two fours and nine sixes in a 25-ball 65 before being run out off the penultimate ball.

"It was important to bat along when AB is not here," said Kohli, whose team remain bottom of the table with just two wins.

"AB was disappointed for not making it for the game tonight and I told him that I'll give him a hug if we win," he added.

Moeen let Kohli know in advance that he was going to set off some T20 fireworks.

"Moeen said 'I am going to go now' and I asked him to go for it. He targeted the small boundaries and changed the game in those few overs."

"Steyn getting those crucial wickets was important for us. I think picking up wickets in the powerplay is crucial as it sets the tone for the rest of the innings," said Kohli.

His team remain bottom of the table and face a struggle to reach the playoffs.