The man who has lost 24 times but won't give up 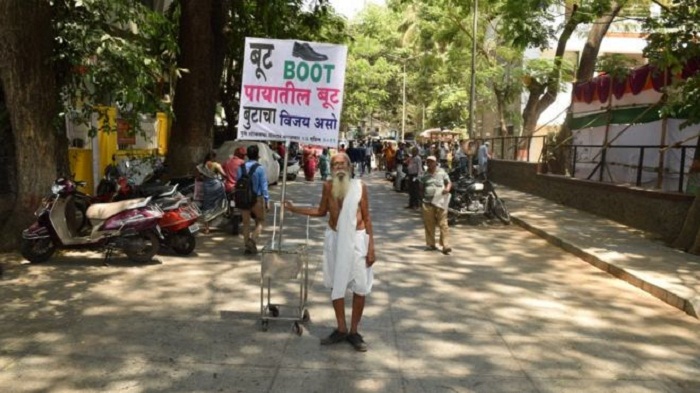 Every Indian election throws up several independent candidates who, despite the odds stacked against them, take a chance on democracy. Omkar Khandekar reports on one man who has lost two dozen times but refuses to stop trying.

Vijayprakash Kondekar is now a familiar face in Shivaji Nagar in the western city of Pune.

For the past two months the 73-year-old has been going around the neighbourhood trying to drum up support for his election campaign.

"I just want to show people that party politics is not the only way in the largest democracy in the world," he says. "I plan to give the country independent candidates like myself. It's the only way we can clean up all the corruption."

Mr Kondekar is contesting a parliamentary seat that will go to the polls in the third phase of voting on 23 April. India's mammoth general election kicked off on 11 April and is taking place over seven stages, with votes being counted on 23 May.

Mr Kondekar is running as an independent candidate. One day, he hopes to become prime minister.

If that happens, he says he will give every Indian citizen 17,000 rupees ($245; £190). He says doing so would be "easy enough" if the government reduced other expenses.

Until the late 1980s, he used to work for the state electricity board in Maharashtra. Now, he can often been seen walking around Pune, pushing a steel cart on wheels with a signboard attached to it. Previously, locals say, the board carried a request for donations - but not much, less than a dollar.

Now the signboard says "Victory for the boot" - a reference to the election symbol allotted to Mr Kondekar by India's Election Commission.

It makes for an amusing sight in the city's streets. While many people ignore the aspiring politician, others request selfies. Mr Kondekar happily obliges, hoping to benefit from free publicity on social media.

Others openly scoff at what they see: a frail man with long white hair and a beard, walking in the hot April sun to canvass for votes while wearing only cotton shorts.

And that's before they find out that Mr Kondekar has contested - and lost - more than 24 different elections at every level of the Indian political system, from local polls for municipal bodies to parliamentary elections.