Jail Superintendent branded Om on my back: Tihar undertrial 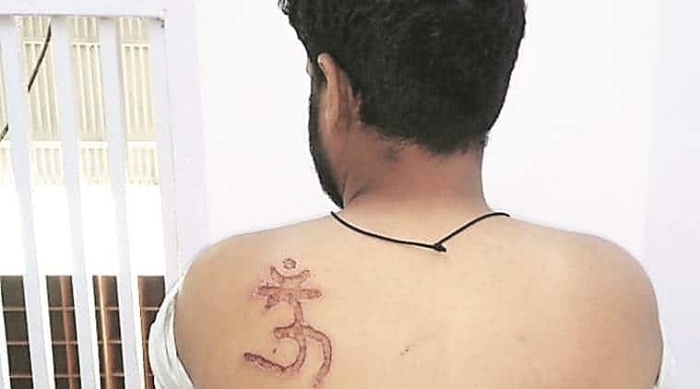 A Tihar Jail undertrial took off his T-shirt in a Delhi court to show an Om symbol branded on his back which he alleged was the handiwork of a jail superintendent who had used hot metal for the carving.

Nabbir told Metropolitan Magistrate Richa Parihar that the superintendent not only denied him food for two days in the name of Navratra but also told him that he would convert him to Hinduism.

This happened in the Karkardooma Courts Wednesday after Nabbir’s lawyer Jagmohan Singh filed an application, a day after he met his client who narrated his ordeal. Arrested in 2016 under the Maharashtra Control of Organised Crime Act (MCOCA) and Arms Act, Nabbir had been kept in the High Risk Ward of Jail No. 4.

Directing the Tihar authorities to probe the complaint and submit a report, Metropolitan Magistrate Parihar said: “The allegations raised by the accused are of serious nature and require immediate intervention. In view of same, notice is being issued to DGP Prison, Headquarter, Tihar Jail No. 4, New Delhi to get the medical examination of accused Nabbir conducted with immediate effect and also to make enquiry report regarding the burn imprinted ‘Om’ mark on the person of the accused. Necessary CCTV footage be collected and statement of other inmates be also taken in this regard.”

The court also instructed jail authorities to ensure Nabbir’s safety and that he be “immediately removed from the direct or indirect supervision of jail superintendent Rajesh Chauhan”.

Reached for comment, Ajay Kashyap, Director General of Tihar, told The Indian Express: “We have ordered an enquiry into the incident. The inmate has been shifted to a different jail. He was lodged in the high-risk prison which is monitored by CCTV cameras. The footage will be scanned and the inmate’s medical examination will be carried out. If the superintendent is found guilty, strict action will be taken. The report will be submitted in court once the enquiry is complete.”

The court, which had called for a report by Thursday, has now asked the jail authorities to submit it by Monday.