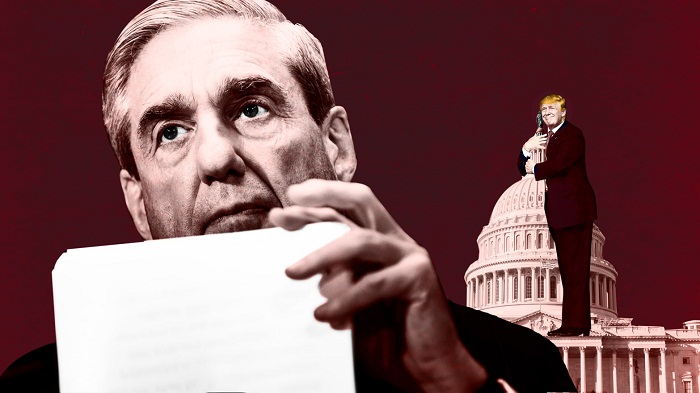 Democrat Jerry Nadler, chairman of the House judiciary committee, argued they are entitled to an unredacted version.

The Department of Justice has reacted by calling the subpoena "premature and unnecessary".

It said it would "continue to work with Congress to accommodate its legitimate requests consistent with the law and long-recognized executive branch interests".

Elizabeth Warren became the first Democratic presidential candidate to call for Mr Trump to be impeached.

"The severity of this misconduct demands that elected officials in both parties set aside political considerations and do their constitutional duty," she said.

The 448-page redacted document is the result of a 22-month investigation by Robert Mueller, who was appointed to investigate alleged Russian interference in the 2016 election and possible collusion with the Trump campaign.

However, while the report does say the president did not collude with the Russians, it did not come to a firm conclusion on the issue of obstruction of justice.

It also includes large swathes of redactions, which Mr Nadler says "appear to be significant" in revealing how Special Counsel Mueller and his team came to their conclusions

Democrats have promised to continue pursuing Donald Trump following the release of the report on Thursday.

What's in the report?

Mr Mueller's report says he found no criminal conspiracy between Mr Trump's campaign and Russia, but could not reach a concrete legal conclusion on whether Mr Trump tried to obstruct the investigation.

"If we had confidence after a thorough investigation of the facts that the president clearly did not commit obstruction of justice, we would so state," the report says. "Based on the facts and the applicable legal standards, we are unable to reach that judgement.

Media captionWhy no charge of obstruction of justice? A law professor breaks down the legal questions.

"Accordingly, while this report does not conclude that the president committed a crime, it also does not exonerate him."

Mr Trump instructed a White House lawyer to try to get Mr Mueller removed over alleged "conflicts of interest", but the lawyer resigned because "he did not plan" to follow the directive

Mr Mueller examined 10 actions by the president in regards to obstruction of justice, which he said largely "took place in public view"

However, about 10% of the report is redacted - which means it may include yet more revelations.

What do Democrats say?

Mr Nadler issued the subpoena for the full, unredacted version on Friday, giving the US Attorney General until 1 May to respond.

"My committee needs and is entitled to the full version of the report and the underlying evidence consistent with past practice," Mr Nadler said.

"The redactions appear to be significant. We have so far seen none of the actual evidence that the Special Counsel developed to make this case."

Democrats had already vowed to call Mr Mueller to publicly testify before congress about the work he has done, with Congresswoman Jackie Speier telling the BBC that Mr Mueller had "basically tossed the ball to Congress and said, 'you need to pursue obstruction of justice here'."

Democrats have also attacked US Attorney-General William Barr, accusing him of "misleading" them with an earlier summary of the report's findings regarding whether Mr Trump obstructed justice.

Mr Barr held a news conference before the report was made public in which he backed the president.

How has Mr Trump responded

Mr Trump celebrated on Thursday, saying it was a "good day" and that there was "no collusion" and "no obstruction".

But first thing on Friday he took to Twitter to attack "the Crazy Mueller Report" which he said was written by "Angry Democrat Trump Haters" and was "fabricated" and "totally untrue".

Representatives for the president had earlier reiterated his view that the investigation was a "hoax" and called for reprisal inquiries.

"President Trump has been fully and completely exonerated yet again," Mr Trump's 2020 campaign manager Brad Parscale said in a statement.

"Now the tables have turned, and it's time to investigate the liars who instigated this sham investigation into President Trump, motivated by political retribution and based on no evidence whatsoever."