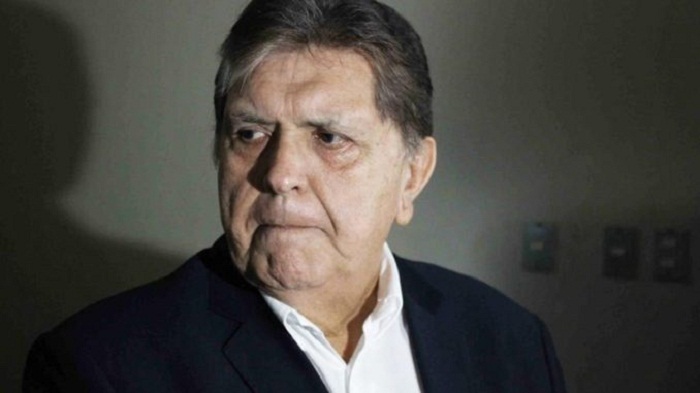 Mr García shot himself in the head as police knocked on his door to arrest him on suspicion of taking bribes from the Brazilian company Odebrecht.

His daughter read his suicide note at the wake.

In the letter, Mr García stated that he did not have to suffer the "injustices" of being arrested for alleged acts of corruption.

In what was the most dramatic event in the sprawling Odebrecht scandal - an investigation into how the company bribed officials or electoral candidates across Latin America in exchange for lucrative building contracts - Mr García ended his life on Wednesday to avoid arrest.

Friends, allies and leaders across the political spectrum paid their respects to Mr García at the headquarters of his APRA party, one of Latin America's oldest political parties.

There was also plenty of anger aimed at President Martín Vizcarra, with some shouting "Vizcarra is a murderer" at the wake, in reference to Mr García's claim that his prosecution had been politically motivated.

At least eight people died on their way to the funeral when the bus they were travelling in crashed into the side of a bridge.

What was in the note?

During the wake, the former leader's daughter, Luciana García Nores, read a letter her father had penned before taking his own life.

"I have seen others paraded in handcuffs guarding their miserable existence, but Alan García does not have to suffer those injustices and circuses," he wrote in the letter, Efe news agency reports.

"For that reason, I leave my children the dignity of my decisions; to my colleagues, a sign of pride. And my corpse as a sign of my contempt towards my adversaries because I already fulfilled the mission that I set myself.

"May God, to whom I go with dignity, protect the good-hearted and the most humble."

What was Mr García accused of?

Investigators say he took bribes from Odebrecht during his second term in office, linked to a metro line building project in the capital.

But Mr García maintained he was the victim of political persecution, writing in a tweet on Tuesday that there was "no clue or evidence" against him.

In November last year he unsuccessfully applied for political asylum in Uruguay.