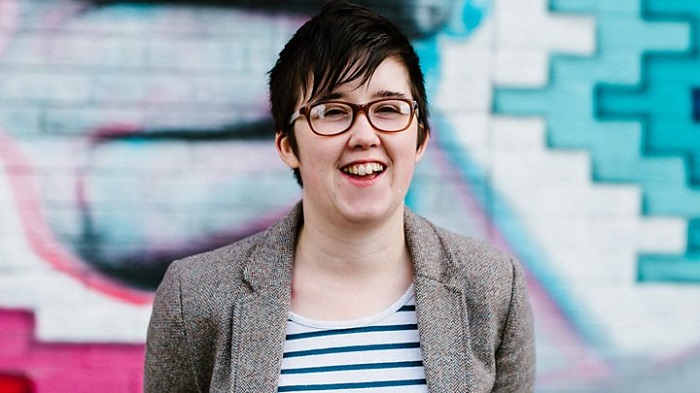 One of Northern Ireland's "most promising" journalists has been shot dead during rioting that police are treating as a terrorist incident.

Dissident republicans are being blamed for killing 29-year-old Lyra McKee after violence broke out during police searches in Londonderry on Thursday.

Police said a group known as the New IRA "are likely to be the ones" responsible for her murder.

McKee's partner said she had been left without "the love of my life".

Sara Canning, speaking at a vigil in Derry, said the journalist's dreams had been "snuffed out by a single barbaric act".

Prime Minister Theresa May said the killing was "shocking and senseless".

McKee was a journalist who "died doing her job with great courage", added Mrs May.

The National Union of Journalists (NUJ) described McKee as "one of the most promising journalists" in Northern Ireland.

The Police Service of Northern Ireland (PSNI) said that a gunman fired shots towards police officers in Derry's Creggan area at about 23:00 BST on Thursday.

Mobile phone footage taken by a bystander during the rioting appears to show a masked gunman crouching down on the street and opening fire with a handgun.

McKee, who was standing near a police 4x4 vehicle, was wounded.

"She was taken away from the scene in a police Land Rover to Altnagelvin Hospital but unfortunately she has died," said Assistant Chief Constable Mark Hamilton.

The leaders of Northern Ireland's six biggest political parties said they were "united in rejecting those responsible for this heinous crime".

In a joint statement, they said: "Lyra's murder was also an attack on all the people of this community, an attack on the peace and democratic processes.

"It was a pointless and futile act to destroy the progress made over the last 20 years, which has the overwhelming support of people everywhere."

Detectives have started a murder inquiry and the PSNI's Deputy Chief Constable Stephen Martin said "evil people" had been behind the killing.

McKee's death has caused a "wave of shock and sympathy" and was "met with global condemnation, horror and revulsion", he added.

"The gunman and those who share his warped ideology should hang their heads in shame today - they represent no-one."

Taoiseach (Irish Prime Minister) Leo Varadkar said McKee "changed lives" as a journalist and an activist and would continue to do so.

Irish people stood in "solidarity with the people of Derry" after the murder," he said.

"We stand with you as strong as your walls and for as long as they stand," he added.

McKee was a journalist of "courage, style and integrity" and a "woman of great commitment and passion", according to the NUJ's Séamus Dooley.

"I have no doubt that it was that commitment which led to her presence on the streets of the Creggan last night, observing a riot situation in the city," he added.

Filmmaker Alison Millar, who was due to have dinner with McKee on Friday night, said her friend had been "stolen from us".

"Lyra was the most beautiful human being," she said.

"She was compassionate, she was honest, she was funny... she had so many friends and was loved by so many people."

Dissident republican activity has been increasing of late, with police in Northern Ireland fearful of a spate of violent incidents marking the anniversary of the 1916 Easter Rising.

An intelligence-led operation took them into Londonderry's Creggan estate late on Thursday night in a hunt for weapons and ammunition.

They were concerned they could be used in the days ahead to attack officers.

The group blamed for killing Lyra McKee is known as the New IRA and was behind a bomb attack outside the city's courthouse at the start of the year.

The violence on Thursday night broke out after police raids on houses in the Mulroy Park and Galliagh areas in Derry.

"Violent dissident republicans are planning attacks in this city and we were carrying out a search operation in Creggan," said the PSNI's Hamilton.

Rioting began at Fanad Drive - more than 50 petrol bombs were thrown at police and two vehicles were hijacked and set on fire.

"I believe that this was orchestrated - orchestrated to a point that they just want to have violence and attack police," said Hamilton.

"Bringing a firearm out is a calculated and callous act."

One reporter who was at the scene said a gunman "came round the corner and fired shots indiscriminately towards police vehicles".

"There were a number of houses with families - they had all spilled out on the street to see what was happening," added Leona O'Neill.

"There were young people, there were children on the street, there were teenagers milling about and a gunman just fired indiscriminately up the street."

Archbishop Eamon Martin, the head of the Catholic Church in Ireland, tweeted to ask people to pray for McKee's family.