US, Russia thwart progress on UN call for Libya ceasefire 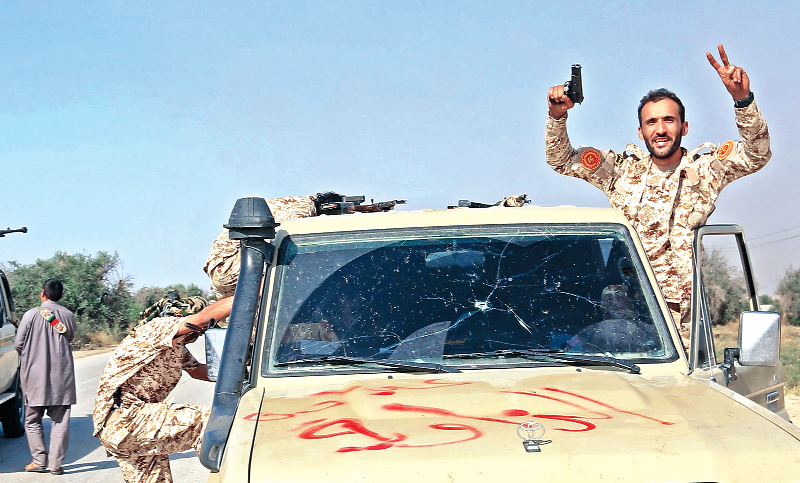 UNITED NATIONS: A British bid at the UN Security Council to demand a ceasefire in Libya faced opposition Thursday from Russia and the United States, raising doubts about prospects for a draft resolution to halt the bloodshed in Tripoli, diplomats said, reports AFP.

Britain put forward the measure after forces loyal to Khalifa Haftar launched an offensive on April 4 to seize Tripoli, a move that threatened to plunge the north African country into deep turmoil.

During a closed-door council meeting on Thursday, Russia again insisted that there be no references in the draft resolution criticizing Haftar while the United States appealed for more time to weigh its options, diplomats said.

The divisions among world powers deepened as fighting escalated in Tripoli, with the death toll now reaching over 200, while more than 25,000 people have been driven from their homes.

“We want to have this resolution,” German Ambassador Christoph Heusgen told reporters after the meeting. “We want to have a strong resolution... with a united council - everybody behind it - that says who is responsible and what needs to be done.” “Not having this now is something that is frustrating,” he added.

Meanwhile, the UN said Friday it had evacuated 163 refugees from war-ravaged Libya to neighbouring Niger, but more than 3,000 others were still trapped in detention centres affected by clashes. The move marked the first evacuation of refugees and migrants out of Libya since fighting escalated in Tripoli two weeks ago, the UN refugee agency said.

“Given the situation in Libya, humanitarian evacuations are a lifeline for detained refugees whose lives are in jeopardy in Libya,” UN refugee chief Filippo Grandi said in a statement.

The operation came as fierce fighting continued between forces loyal to strongman Khalifa Haftar and those backing the internationally recognised Government of National Accord (GNA).

The renewed fighting has killed over 200 people and left more than 900 wounded, the World Health Organization said Thursday.

More than 25,000 have been displaced, according to the International Organization for Migration.

Dozens of women and children were among those evacuated on the UNHCR flight that landed in Niger early Friday morning.

They had all been held in detention centres near the frontlines of the conflict.

UNHCR said it had previously relocated many of them from the Abu Selim and Ain Zara centres to its Gathering and Departure Facility (GDF) in the centre of the capital.

In all, it said, it had relocated 539 refugees from several detention centres near the immediate fighting zone.

But it said more than 3,000 refugees and migrants remain trapped in detention in areas where the fighting was raging.

The agency said it remained “extremely concerned” for the safety of those who remain “trapped inside detention centres and exposed to violence.”

Grandi meanwhile hailed Niger for welcoming the refugees and urged other countries to follow suit.

“Niger’s solidarity in receiving these refugees is world-leading and exemplary, but Niger cannot do this alone,” he said.

“There must be shared responsibility and we need other countries to come forward to lend a hand and help bring vulnerable refugees out of Libya to safety.”

UNHCR issued an urgent appeal to the international community to find solutions for all the trapped and detained refugees in Libya.

Among other things, it said there was a need for evacuations and humanitarian corridors to allow refugees in its GDF in Tripoli to find safety abroad.

It also said new such spaces were needed, since the facility had only limited capacity.