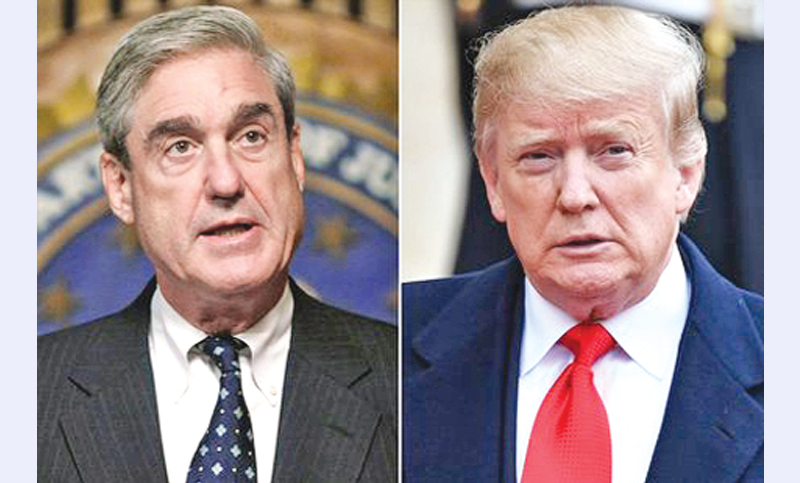 Washington: Democrats have vowed to continue pursuing Donald Trump over allegations he obstructed justice, following the release of a report into Russian meddling in the 2016 election, report agencies.

They want Robert Mueller, the man who collated the report, to publicly testify before congress about the work he has done.

It comes after a redacted version of the document was released on Thursday.

But while the report does say the president did not collude with the Russians, it did not come to a firm conclusion on the issue of obstruction of justice. It also reveals several occasions when Mr Trump tried to hinder the investigation itself - including attempting to have Mr Mueller removed.

The 448-page redacted document is the result of a 22-month investigation by Mr Mueller, who was appointed to investigate alleged Russian interference in the 2016 election and possible collusion with the Trump campaign.

Mr Mueller’s report says he found no criminal conspiracy between Mr Trump’s campaign and Russia, but could not reach a concrete legal conclusion on whether Mr Trump tried to obstruct the investigation.

“If we had confidence after a thorough investigation of the facts that the president clearly did not commit obstruction of justice, we would so state,” the report says. “Based on the facts and the applicable legal standards, we are unable to reach that judgement.

Meanwhile, US President Donald Trump on Friday dismissed unfavorable testimony in the Mueller report on Russian election interference as “fabricated” by his political foes.

“Statements are made about me by certain people in the Crazy Mueller Report, in itself written by 18 Angry Democrat Trump Haters, which are fabricated & totally untrue,” the president tweeted.

On the other hand, Russia on Friday once more dismissed the Mueller report, saying it failed to present clear evidence of any meddling by Moscow in the 2016 US election and called its impact on relations regrettable.

“As a whole the report as before does not present any reasonable proof at all that Russia allegedly meddled in the electoral process in the US,” Kremlin spokesman Dmitry Peskov told journalists, saying it contained “no new information.”

Russia has consistently rejected any suggestion that it interfered in the election won by Donald Trump. The politically explosive probe by Special Counsel Robert Mueller ruled that Trump’s campaign did not criminally conspire with Russians to skew the election, and drew no conclusion on allegations of obstruction.

“We regret that documents of such quality have a direct influence on the development of US-Russian bilateral relations which are not in the best shape as it is,” Peskov said.

He even suggested that US taxpayers should question why their money was spent on the lengthy probe with such a result.

“In our country, the Audit Chamber would probably take an interest in such a report: what did American taxpayers’ money get spent on? But let the US taxpayers themselves ask that question,” Peskov added.