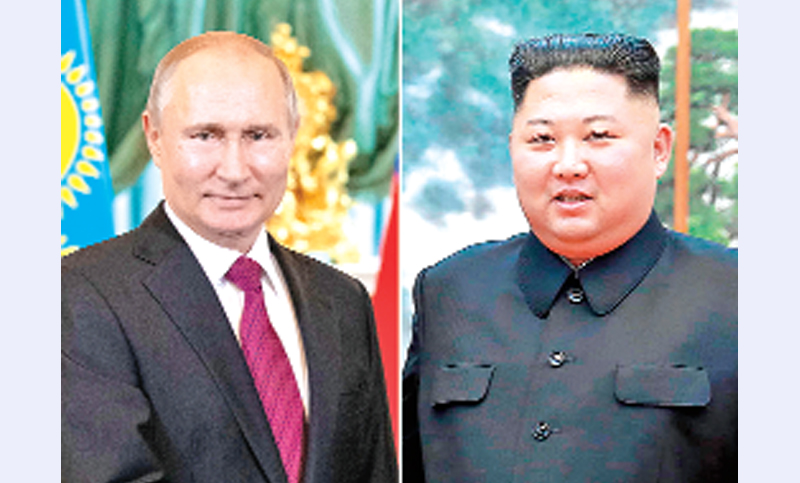 MOSCOW: With Russia’s Vladimir Putin set for his first talks with North Korean leader Kim Jong Un this month, Moscow is eyeing a major role in yet another global flashpoint, reports AFP.

The situation on the Korean peninsula seemed to be stabilising after a historic meeting between Kim and US President Donald Trump last year, at which they both backed de-nuclearisation.

But a second round of talks ended in failure and Pyongyang this week said it was testing weapons again.

Now Putin, who has long expressed his readiness to meet with Kim, is gearing up to play a bigger role in nuclear negotiations with Moscow’s Cold War-era ally, with which it shares a short border.

Russia’s main interest in the summit is to remind other players “that it exists and that it has economic and political potential” in the region, Andrei Lankov of Seoul’s Kookmin University told AFP.

“Russia needs some sort of control over the situation on the Korean peninsula. Recent events have pushed out almost everyone apart from North Korea and the US, and of course nobody likes that,” he said.

Russia has been inviting Kim for talks since last year but he was unwilling to spend time and resources on the trip because Moscow was not a major player, Lankov said.

But now Kim is looking for all the allies he can get “because (the second round of US talks) were a failure, and he was not able to achieve the things he was counting on.”

Moscow has relatively good relations with the reclusive regime, though these have deteriorated from Soviet-era highs.

Putin has expressed tacit support for Pyongyang, saying last year that “it seems counterproductive if we demand everything from the North Korean side and in response they are given nothing”.

The US has accused Moscow, which provides some food aid to North Korea, of helping Pyongyang evade some international sanctions—a charge Moscow denies.

China, intent on keeping Pyongyang within its sphere of influence, has played diplomatic wingman to North Korea—even loaning Kim an Air China jet to travel to his landmark first meeting with Trump in Singapore last year.

Russia’s role in any global negotiations will likely be as part of a group with China and North Korea itself, Konstantin Asmolov, a Korea specialist at the Moscow-based Institute of the Far East, told AFP.

Russia’s foreign policy focus remains on former Soviet states and the Middle East, particularly its backing for the regime of Bashar al-Assad in Syria, Asmolov said.

Lankov, meanwhile, said it was futile to hope for any practical breakthroughs at the Putin-Kim summit.

“There will be declarations, promises, they will sign yet another declaration of intent to increase trade 10 times in five years, but after two years they will forget about it,” he said. The Kim-Putin summit is set take place before the end of April, the Kremlin announced Thursday, without specifying a date or a location.

International media reported that the summit was set for Russia’s far-eastern city of Vladivostok, which lies not far from its short land border with North Korea.

There is also a chance that the talks will not take place at all: Kim pulled out of 2015 celebrations in Moscow for the 70th anniversary of the end of World War II at the last minute.