US envoy holds talks with stakeholders in Ctg to promote trade 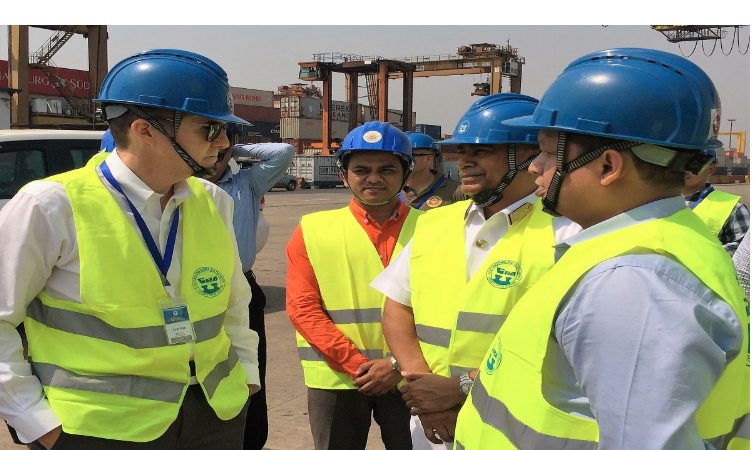 US Ambassador to Bangladesh Earl R Miller has met Chittagong Port Authority Chairman Rear Admiral Zulfiqur Aziz and toured the seaport facilities through which over 90 percent of Bangladesh’s trade flows.

They discussed the important role US private business investment could play in port upgrades and other construction projects.

The US envoy visited Chattogram on April 16-19 to promote bilateral trade and investment, support the growing military partnership between the United States and Bangladesh, and bolster people-to-people ties, said the US Embassy in Dhaka on Friday.

The FSRU has a 500 million standard cubic feet of gas per day regasification capacity, increasing Bangladesh’s ability to reliably use its domestic natural gas reserves.

Ambassador Miller met business leaders to learn more about local industries that contribute to the economic development of both the Bangladeshi and US economies.

He also visited a ship-breaking yard and a steel melting and re-rolling facility.

Miller reiterated the importance of worker rights and safety, and called on business leaders to protect workers and the environment and put an end to child labor.

The US envoy laid a wreath and planted a tree to honour Seaman Mohammad Nurul Islam who was killed during a UN Peacekeeping Operation (PKO) in 2005.

He paid his respects to the 146 Bangladeshis who have lost their lives in PKOs, and expressed his appreciation for Bangladesh’s support of international peace and security as the second largest troop-contributing country in the world.

He highlighted the opportunities of studying in the United States as well as the EducationUSA information and services offered at the Corner.

He later met with the founder and the Vice Chancellor of the Asian University for Women to express his support for their dedication to women’s education and leadership development including Rohingya students.

The US Ambassador visited the Chattogram War Cemetery where he laid a wreath at the grave of American pilot William B Rice, who lost his life as a member of the British Royal Air Force during World War II.

He also laid a wreath at the Cross of Remembrance in honour of the sacrifices of all who died in the conflict.