Vatican displays Holy Stairs for the first time in 300 years 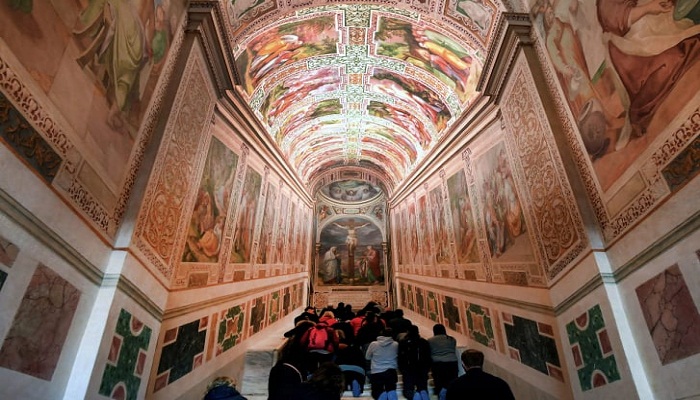 Visitors to Rome this Easter can have a once-in-a-lifetime experience: climbing the original stairs that Jesus is said to have walked on while on his way up to be judged by Pontius Pilate before his crucifixion.

The Holy Stairs -- known in Latin as Scala Sancta -- have been covered with wooden planks for 300 years, but for the next two months, their original marble is exposed following an extensive restoration project.

Drops of Jesus' blood that are said to have fallen on the steps are marked by medieval crosses in three places on the stairs. Tourists stop to kiss and touch them as they make their way up the 28 marble steps on their knees.

"The Gospel of John recounts that Jesus went up these stairs several times," said Father Francesco Guerra, Rector of the Holy Stairs.

Although there is no written documentation, tradition has it that Emperor Constantine's Mother, Helen, an avid collector of relics of Jesus in the 4th century, had the stairs brought over from Jerusalem.

"We know for certain that St. Helen transported the nails used to crucify Jesus and a portion of his cross, to a church near here," said Guerra.

The restoration also turned up a surprising discovery: deep grooves in the marble caused by centuries of wear and tear from the knees and feet of pilgrims. "Up until a few days ago, it wasn't possible to see this because the stairs were covered for 300 years by walnut planks," Guerra added.

Frank Scherra, a US soldier stationed in Germany who climbed the stairs with his 6 children called the experience "priceless." "It gave me time to reflect and think about people that had an impact on my faith and my family, he said, "And those that I know are in heaven or trying to get there. It was a chance to pray for them."

Others have recounted stories of conversions and deeply emotional experiences from their climb.

At the top of the stairs is a room called the Holy of Holies. It was once a private chapel of Popes and it contains relics of saints and one of the oldest icons of Jesus found in Rome, dating to the 5th century.

The stairs will soon be covered over again with wood to protect the marble, but for the next few weeks visitors to Rome can literally walk, or at least kneel, on what are believed to be the original footsteps of Jesus.