If Rahul Gandhi becomes Prime Minister, I will sit by his side: Deve Gowda 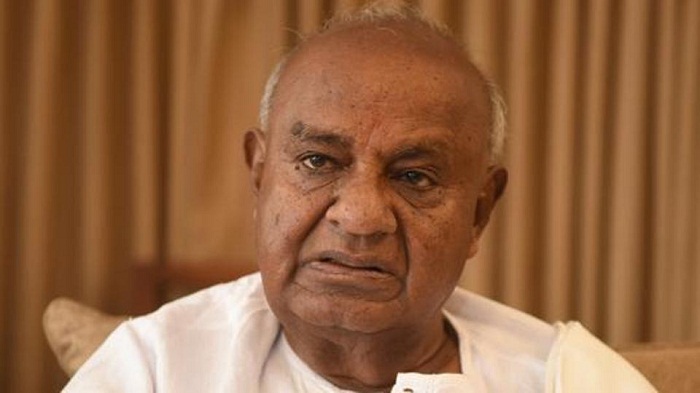 Former prime minister Deve Gowda, 85, who is is contesting from Karnataka’s Tumkur parliamentary constituency, said that if Rahul Gandhi becomes the Prime Minister of the country, he will be by his side.

The JD(S) chief, who along with his two grandsons is contesting the ongoing Lok Sabha elections, also made it clear that he was not retiring from active politics. “I announced three years back that I will not contest elections. There are circumstances now in which I have been forced to contest. There is nothing to hide. I have no ambition of anything but what I always said is that I am not going to retire from active politics,” Gowda said.

When asked if he wanted to retire like Advani, he said ‘no’, adding, “I want to save my party first and last the office building,” ANI reported.

Speaking about his commitment to the Congress, he said: “Madam Sonia Gandhi has taken the decision to support Deve Gowda even though we are a small party. Now it is my responsibility to move forward with Congress, though I do agree in some states there is no question of any coalition. But in Tamil Nadu, there is a coalition between Congress and DMK and with Sharad Pawar’s party in Maharashtra.”

Responding to accusations of saving the family rather than the party, the JD(S) chief said: “Several leaders who worked with me collectively, have left. Some people are in Congress, some in BJP. I was able to keep the party intact but suffered. I have not allowed my family members to become president of the party.”