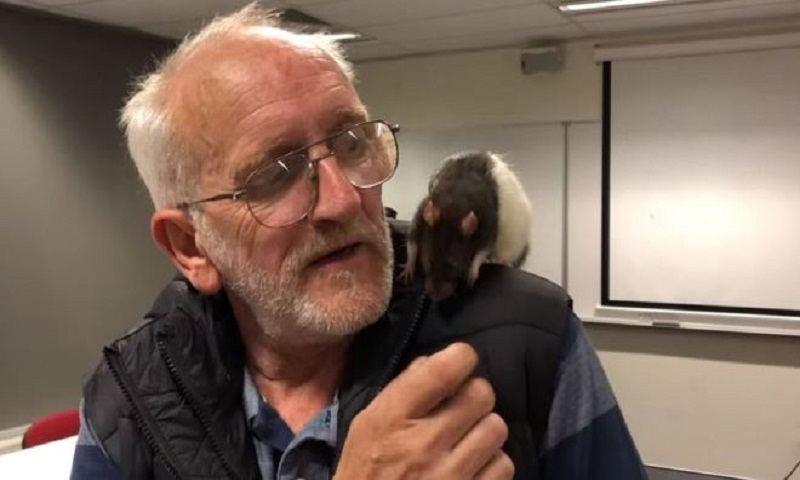 A homeless man in Sydney, Australia, has been reunited with his pet rat which disappeared earlier this month.

Chris, 59, is a well known figure in downtown Sydney where the rat, called Lucy, is usually curled up on a box in front of him.

But one day his little companion disappeared as he stepped away to take a toilet break.

After a social media appeal, New South Wales police tracked down the missing pet and reunited the pair on Thursday.

Chris had assumed Lucy was stolen after she disappeared from the milk crate where he'd left her.

Desperate to find her, he put a note up on his box, asking if anyone had seen her.

What followed was an outpouring of support, with people posting their own pictures of the pair, hoping that someone had seen Lucy or the person who'd taken her.

Police appealed for information, believing Lucy had been stolen, but eventually found the missing rodent.

"A woman, who walked past and saw Lucy alone, believed she had been abandoned, so took her home and cared for her," police said in a statement.

Lucy was returned to Chris at a local police station on Thursday.

When officers asked him to make sure they had got the right animal he replied: "Yes, that's her! She's got the blind eye. She remembers me!"

Picking her up from a cardboard box, Chris was visibly relieved, thanking the officers for their efforts.

"Sorry for putting you all through the trouble of looking for her.

"It feels wonderful. Thank you very much, everybody," he said as his little furry friend scurried around his shoulders.

"She knows she's missed me too."