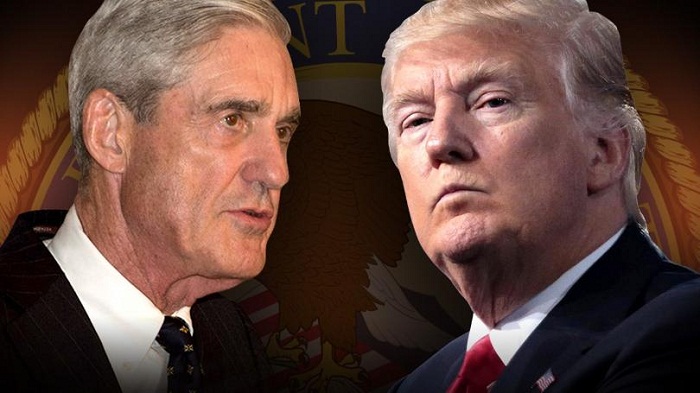 Mr Trump's legal team has described the report as a "total victory".

But the country's top lawyer, William Barr, is facing heavy criticism of his handling of the report's release.

Senior Democrats have accused the attorney general of "misleading" them with an earlier summary of the report's findings regarding whether Mr Trump obstructed justice.

The mammoth document is the product of a 22-month investigation by Mr Mueller - who was appointed to probe Russian interference in the 2016 election and possible collusion between Russia and the Trump campaign.

His team's investigation has led to 35 people being charged, including several who were a part of the president's campaign and administration.

What does the report reveal?

Mr Mueller's report says he found no criminal conspiracy between Mr Trump's campaign and Russia, but could not reach a concrete legal conclusion on whether Mr Trump tried to obstruct the investigation.

"If we had confidence after a thorough investigation of the facts that the president clearly did not commit obstruction of justice, we would so state," the report says. "Based on the facts and the applicable legal standards, we are unable to reach that judgement.

"Accordingly, while this report does not conclude that the president committed a crime, it also does not exonerate him."

The report says that in June 2017, Mr Trump called Don McGahn - then a White House lawyer - to try to get Mr Mueller removed over alleged "conflicts of interest".

Mr McGahn told the special counsel he resigned after feeling "trapped because he did not plan to follow the President's directive" and would not have known what to say to Mr Trump had he called again.

Mr Trump reportedly used an expletive when the investigation was announced, adding: "Oh my god. This is terrible. This is the end of my presidency"

Mr Mueller examined 10 actions by the president in regards to obstruction of justice, which he said largely "took place in public view"

The report says that potential obstruction of justice by the president only failed because members of his administration, including former FBI Director James Comey, refused to "carry out orders"

The special counsel considered charging the president's son, Donald Trump Jr, and son-in-law Jared Kushner but did not think they could meet the Department of Justice's burden of proof that they wilfully broke the law

Why no charges for Trump?

Robert Mueller has said that the written answers provided by Donald Trump were inadequate, but if that's the case, why didn't he use his subpoena powers to demand the president come before his investigating committee and answer questions directly?

That was an arm wrestle he chose not to get into with the president for fear that it may lead to the permanent death of his investigation.

So he ducked that one.

Others may ask: "Well, if you thought there was a level of obstruction why didn't you say there should be an indictment?"

I'd say what he's done here - to use an American analogy - is he's taken the baseball bat, he's put it on home plate and he's leaving it for other people to pick up and take a swing.

He's saying to Congress essentially: "I've looked at it. I didn't resolve this question. I didn't exonerate him. But if you want to have a go, that's a different thing."

How has Mr Trump reacted?

Speaking at an event for veterans earlier, Mr Trump said he was having a "good day" - adding that there was "no collusion" and "no obstruction".

Representatives for the president have also reiterated his view that the investigation was a "hoax" and called for reprisal inquiries.

"President Trump has been fully and completely exonerated yet again," Mr Trump's 2020 campaign manager Brad Parscale said in a statement.

Media captionTrump on Mueller report: "This should never happen to another president again"

"Now the tables have turned, and it's time to investigate the liars who instigated this sham investigation into President Trump, motivated by political retribution and based on no evidence whatsoever."

His comments followed a stream of social media posts by the president on Thursday regarding the report's release.

In one tweet, he said had the right to "end the whole witch hunt" and fire Mr Mueller had he wanted to.

How are the Democrats responding?

Representative Jerry Nadler confirmed that the House Committee on the Judiciary had already requested the special counsel to appear "as soon as possible".

Senior Democrats have called on Mr Mueller to testify to them directly in order to "restore public trust" after what they described as Mr Barr's "partisan behaviour" regarding the report.

The attorney general, who was appointed by Mr Trump, held a news conference before the report was made public in which he backed the president.

His actions have provoked top Democrats to publicly question his impartiality and independence.

"Attorney General Barr appears to have shown an unsettling willingness to undermine his own department in order to protect President Trump," Mr Nadler said on Thursday.

He also said he would issue a subpoena for a copy of the full uncensored version of Mr Mueller's findings.

A joint statement by Nancy Pelosi and Chuck Schumer, who lead the Democrats in Congress, said it was "clear" the report "appears to undercut" Mr Barr's characterisation of it.

Some have called on the attorney general to resign.