Timely action could have averted arson attack on Nusrat: DIG 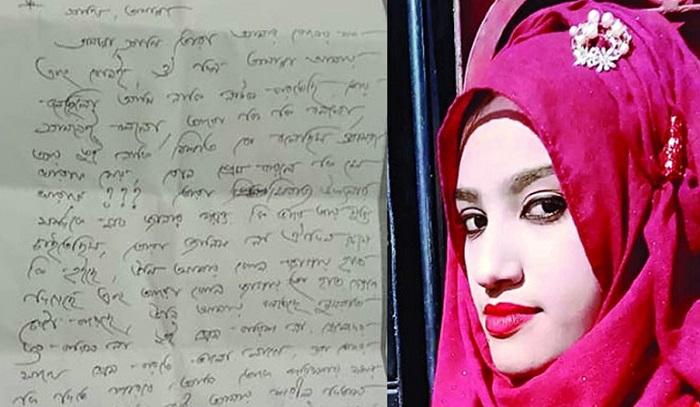 The chief of the probe body investigating murder of Feni madrasa girl on Thursday said the arson attack on Nusrat Jahan Rafi could have been averted had the local administration and the madrasa governing body taken necessary measures about the March 27 sexual harassment.

The probe panel was formed by the Police Headquarters to look into whether there was any negligence on the part of police.

Deputy Inspector General (Police Headquarters) of police M Ruhul Amin, head of the probe committee, came up with this observation while talking to reporters after their two-day Feni visit.

He also said that they found the evidence of fault of former officer-in-charge of Sonagazi Model Police Station Moazzem Hossain.

He said investigation against the OC and other police officers is on and it will take some time to complete it.

Mentioning that Sirajuddoula, principal of Sonagazi Islamia Senior Fazil Madrasa, had some bad track records and the managing committee was aware of those, the probe panel chief said, “This incident (Nusrat murder) would not have happened had they taken steps earlier.”

He also said local politics is also a factor behind the incident. “Two councillors of a party formed human chains in favour and against the principal.”

The five-member probe body visited the madrasa on Wednesday and Thursday, talked to its teachers, students, employees and guardians and took their opinions. They also talked to policemen and members of Nusrat Jahan Rafi.

Meanwhile, another accused in the Nusrat murder case reportedly confessed before court here on Thursday to his involvement in the incident.

Quader told the court that he was one of the masterminds of the incident and guarded the main gate of the madrasa to ensure security of the killers on April 6.

Besides, a court here placed accused Mohammed Shamim on a five-day remand in the case.

He confessed that the murder plan was finalised at a meeting attended by 12 people following an order by madrasa principal Sirajuddoula.

They met the principal at the jail on March 28 and 30. Later, they made the final plan at a meeting on April 4 in presence of 12 people. He was assigned to guard the gate while Nur Uddin and Abdul Quader were with him.

Shahadat, Jubayer and Jaber went to the roof wearing burkas along with Kamrun Nahar Moni and Umme Sultana Popy, he said.

A total 17 people have so far been arrested in the case. Among them, eight people are FIR (first information report) enlisted.