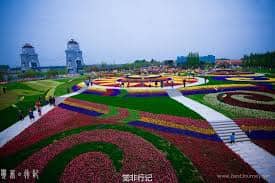 Amid much festivity and fanfare, the month-long international economy, trade and tourism festival was launched in Yangzhou of Jiangsu province, China on Thursday.

A huge number of delegations from 500 global companies and 100 top domestic enterprises and industries attended the opening ceremony.

A total of 55 industrial projects worth about 65.8 billion yuan have been signed in the event titled 2019 Flowery March International Economy, Trade and Tourism Festival in Yangzhou.

In his speech, the city mayor said Flowery March has served as a shining symbol of Yangzhou’s beauty and It has been 18 years since the festival was first held in 2002.

The Festival has grown into an important platform for Yangzhou to promote its economic and trade cooperation, a distinct symbol that displays its features and character, and a grand festival for it to receive and entertain guests from around the world, he said.

The mayor said, "Over all these years, we have chosen to host the Festival at a different location of the city each year, so that our guests may feel and experience the latest changes and developments of the city in person".

This year, it’s the first time for the Festival to be hosted in Jiangdu District, with its main venue at the Park of the Starting Point of the South-to-North Water Diversion Project, he maintained.

The mayor said Jiangdu District is the first county-level administrative division of Yangzhou to have a GDP exceeding 100 billion yuan.

As the starting point of the Eastern Route of China’s South-to-North Water Diversion Project, the District is also an important land for ecological development, he continued.

"Here in this Park, we can get a first-hand experience and knowledge of Jiangdu District’s achievements in practicing the concept of innovative and green development," he added.

Yangzhou is striving to build itself into a beautiful city of parks and gardens, making it a great place to live. Historically, the city enjoyed the fine reputation of being “a city enshrouded in green willows”. A fine, well-preserved ecology and environment is what makes it outstanding.

It is the first city in Jiangsu to win the United Nations-Habitat Scroll of Honor Award and has won such honorary titles as National Forest City, National Ecological City, and National Model City for Water Ecology.

A well-developed system of urban parks is Yangzhou’s best interpretation of a livable city. In recent years, the city has practiced the development concepts of “plus parks” in old town areas and “parks plus” in newly developed urban areas, having planned and built over 350 high-standard urban parks citywide so that it takes any resident just a ten minutes’ walk to access a nearest park. The residents now have wider choice of hang-out destinations for leisure and entertainment, sports and fitness, and sightseeing, in this picturesque city that mixes fine natural, ecological landscapes with human habitats.

Yangzhou is becoming a highly cost-effective city in the Yangtze River Delta region thanks to its improving modern city functions. Though a medium-sized city, Yangzhou possesses a full array of facilities and functions pertaining to a modern metropolis, such as education, health care, culture, entertainment, leisure, and sports. The real estate prices in Yangzhou are kept at moderate levels, and the average housing price in Yangzhou is around 11,000 yuan per square meter. The average monthly rent for office buildings in Yangzhou is 48 yuan per square meter. According to a study by a prestigious institution, Yangzhou boasts the highest cost-effectiveness in the Yangtze River Delta region