Travel Down Under for a Vivid Sydney experience 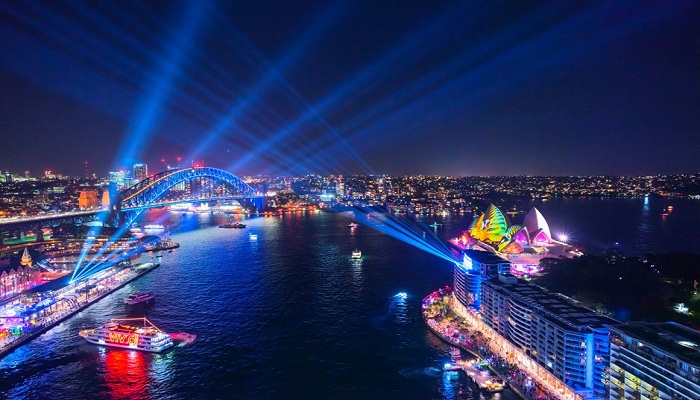 Exciting times are ahead for holidaymakers headed to Sydney, Australia, as Vivid Sydney – the largest festival of light, music and ideas in the Southern Hemisphere – is happening from May 24 to June 15, igniting the Harbour City with a new decade of innovation and creativity.

This festival also features an inspiring and star-studded programme of events with big names such as filmmaker Spike Lee, British electronic titans Underworld and internationally acclaimed songwriter, director and dancer FKA Twigs to name a few.

Vivid Light, will transform Sydney into a night time wonderland for all to experience across the 23 nights of festival, including a light walk with over 50 radiant works curated into the largest outdoor gallery in the Southern Hemisphere, illuminating the city with vibrant lights and eye-catching installations stretching more than 3km.

Lighting up the skyline from 6pm onwards each evening, Vivid Light takes you on a journey as the main highlight, the Lighting of the Sails, unfurls across the architectural wonder of the Sydney Opera House. From there, you can weave your way along the light walk around the harbour front and the Royal Botanic Garden Sydney, exploring Barangaroo, The Rocks and Darling Harbour, or take a short ferry ride to Luna Park Sydney, Chatswood and Taronga Zoo to brighten up your winter nights.

Pixar Animation Studios will illuminate Sydney’s heritage-listed Argyle Cut in The Rocks with a creative light projection for Pixar: 30 years of Art & Animation featuring Toy Story’s Woody and Buzz Lightyear, delighting visitors of all ages as they are transported through a visual feast of behind-the-scenes artwork and the evolution of iconic animation.

Spanning across eight precincts, local and international visitors are advised to plan multiple visits to Vivid Light as there are plenty of pit stops to be made to make the most out of Vivid Sydney’s extensive exhibition of light art.

Those looking for a unique perspective of the festivities can also opt to book other activities like a Vivid Sydney Cruise to view the lights and installations from the harbour or join a Vivid Climb with BridgeClimb for a bird’s eye view from the summit of the Sydney Harbour Bridge.

As for Vivid Ideas, future-facing talks, hands-on workshops and industry-shaping forums are taking place with game changers like Esther Perel and Spike Lee challenging assumptions on race and relationships. Other key highlights include the Mark Colvin Conversation: Net Worth, the New Horizons series and the Citizens of the World workshop where you will seek out bright ideas and discuss new ways of thinking.

There is also more to Sydney than the upcoming festival. With plenty of undiscovered experiences in the city and the surrounds beyond the icons of the Sydney Opera House and Sydney Harbour Bridge, travellers can also experience Sydney’s famous coastal lifestyle with accessible beaches, chic Instagram-worthy cafes and award-winning restaurants by the harbour front.

Once you have tasted the freshest seafood at the iconic Sydney Fish Markets – the largest seafood market in the Southern Hemisphere, you can visit lively weekend markets such as Carriageworks Farmers Market on Saturdays and Bondi Markets on Sundays. You can also easily immerse yourself in the splendour of regional New South Wales with the Blue Mountains only a 90-minute drive away where you can enjoy some of NSW’s most panoramic views and natural attractions.

If you are a lover of food and the finer things in life, then a visit to Hunter Valley, two hours’ drive north of Sydney, is an absolute must. Australia’s oldest wine producing region offers plenty of exciting activities beyond the abundant wine-tasting experiences including sunrise hot air balloon flights, gourmet produce experiences, award-winning restaurants, local distilleries and breweries.

For adrenaline junkies, go on an adventure to Port Stephens, a two-and-a-half hour drive north of Sydney, to enjoy unique wildlife and adventure activities including shark and ray encounters, quad biking across the Southern Hemisphere’s largest moving coastal sand dunes and camel riding along the beach at sunset.

There are also dolphin and whale-watching cruises available in Sydney, Port Stephens or Jervis Bay on the NSW South Coast, with the whale migration starting in late May coinciding with the Vivid Sydney event dates, making it the perfect time for a holiday in Sydney and New South Wales.

AirAsia X flies direct to Sydney daily. Book your tickets at airasia.com (until May 19) and travel from now until June 2 next year. Promo fares for BIG members on all-in economy at RM499 or Premium Flatbed at RM1,890. Alternatively book your entire trip from RM1,799 per pax (hotels from RM169/night) for a 5D4N hotel stay+flight+taxes.