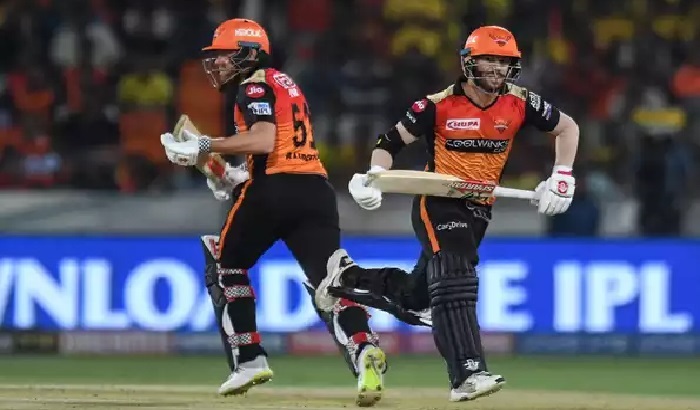 Rashid Khan first, David Warner next and Jonny Bairstow towards the end all chipped in with vital contributions as Sunrisers Hyderabad broke their three-match losing streak with a handsome six-wicket victory against table-toppers Chennai Super Kings.

Opting to bat first, CSK were up against the guile of Rashid as the Afghanistan spinner picked up 2 for 17 on a two-paced pitch to restrict the visitors to 132. In reply, David Warner went berserk at the start, smashing 50 off 24 balls, before Jonny Bairstow took over and wrapped up the win with a fifty of his own. SRH won with 19 balls to spare, giving their NRR a big boost too.

How did CSK manage only so little?

A combination of a few things. The pitch was two-paced and Sunrisers Hyderabad's bowlers bowled the perfect lengths to keep the batsmen honest.

Chennai Super Kings were in a solid position as they were nearing the halfway mark. Their openers had given them a solid platform after electing to bat first. And for a middle order that was without an injured MS Dhoni, it was imperative that the entire middle order cashed in.

Alas, they couldn't. After Faf du Plessis and Shane Watson fell in the space of four deliveries, the rest of CSK's batting order just couldn't come to terms with what the wicket offered. Rashid was brilliant. He went for eight in his first over, but bowled much fuller from his next to make major inroads.

Suresh Raina went for a run-a-ball 13, LBW after not connecting to a sweep, while Kedar Jadhav lasted only two deliveries before falling to the same mode. Ravindra Jadeja looked out of sorts, only crawling to 10 off 20 balls, while Ambati Rayudu, starting off in a three-dimensional battle against Vijay Shankar that ended in a hug at the end of the over, scored 25 off 21. CSK scored only 24 off their last four overs, and ended with a below par 132/5.

What did Watson and du Plessis do different?

For starters, they were helped by a fresh pitch and a hard new ball. There certainly was bounce and some movement on offer, but after trudging to 15 off the first four overs, composed of 17 dots, the pair found their rhythm. The last two overs of the powerplay saw CSK pick off 26 runs and some much-needed momentum.

Du Plessis was certainly the brighter of the two. He used his feet superbly and cleared the ropes with minimal effort. That his three sixes were the only ones in the innings tells the story. Watson struggled but ensured he kept his wicket and not eat up too many deliveries. The pair, after the slow start, started to plunder runs, and by the time Watson fell to a really slow delivery from Shahbaz Nadeem, had scored 79 in 59 balls.

How did SRH fare?

Their openers took a leaf out of CSK's, and executed that perfectly. In fact, only one opener - Warner - mattered, at least during the powerplay. By the time the powerplay was done, Warner had already notched up a rampaging hundred and gone back to the hut.

Warner knew the risks of not making the most of the power play. And with Raina bowling mostly seamers, Warner lapped up the extra pace on offer with glee. 10 boundaries rained off Warner bat as SRH got off to a flyer, scoring 68/1.

Then, when Warner and Williamson fell in quick succession, Jonny Bairstow took over. The Englishman had watched Warner cart the ball to all parts not long ago. Now he showed what he could do. A four off Jadeja and two sixes off Karn Sharma meant SRH needed to score at less than 4 RPO in their last nine overs.

Imran Tahir was the only bowler to give CSK some hope, with the wickets of Williamson and Vijay Shankar, but Bairstow, who brought up his fifty off 39 balls, stayed till the end to take his side home.

What does this do to the points table?

Not much. Chennai are still perched a top the table with a sizable lead SRH, however, will breathe a sigh half relief knowing they are back in contention for a top-four spot. They are now fifth, two points behind KXIP, MI and DC.

Where next for the teams?

Sunrisers Hyderabad host fellow mid-table side KKR on Sunday, while CSK travel to Bangalore to meet a team at the other end of the table later on the same day.