Couple rescued from Australia outback after writing 'help' in mud 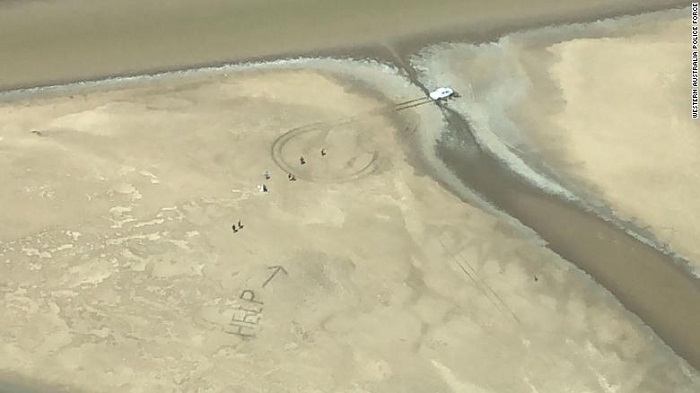 An Australian couple has been rescued from a crocodile-ridden part of Australia's remote north after lighting a fire and scrawling the word "help" in mud to attract the attention of search crews.

But Nulgit said their day of fishing turned into a freezing, sleepless overnight stay when their truck became "bogged" -- Australian slang for getting stuck in mud.

"Our hearts sank," Nulgit told CNN. "Just the feeling of getting bogged ... it's just pretty scary."

Nulgit said they had seen crocodile tracks in the area earlier and, as the waters rose and the sun set, became afraid of being swept away by a large tide -- or being attacked by crocodiles or dingos.

In their home town of Kununurra, 1.5 hours' drive away from the park, Johnson's mother called the police when they failed to return that night.

Nulgit said the pair huddled under a sheet away from the river, but couldn't get any sleep. They wrote "help" in large letters in the dry mud with a fence post at about 4 a.m. Monday, hoping to attract attention from a passing plane. However Nulgit admitted he was worried about being stranded for a long time, adding: "Hardly anyone goes out that way."

On Monday, Kununurra police coordinated a search party using a plane from a local company to find the pair, the Western Australia Police Force said in a statement.

Nulgit said he and Johnson lit a fire as soon as they heard the plane to help draw attention.

"If they had not lit the fire and advised family members details of when they were departing and an expected return time, the couple may not have been located," the police statement added.

Nulgit said the adventure wouldn't deter the pair from heading out again -- although next time they'll have a recovery kit organized beforehand.

"I'm just grateful for everyone who pitched in and helped and came out to look for us," he said. "We're pretty lucky surviving and getting out of that."