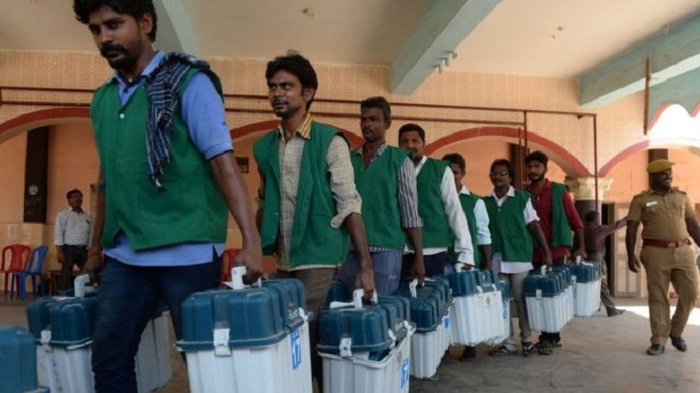 This is the second stage of polling in the country's general election - widely seen as a referendum on Prime Minister Narendra Modi.

Polling will be held in 97 seats, and tens of millions are eligible to vote.

Regional parties in states like Tamil Nadu in the south and West Bengal in the east are hoping to do well.

The election is taking place over seven stages, with votes being counted on 23 May. With 900 million eligible voters, this is the biggest election the world has ever seen.

He will be hoping for a repeat performance. But the kingmakers in this election are expected to be regional parties, which dominate politics in several Indian states and are fronted by charismatic local politicians.

Where are the big regional parties?

The state of Tamil Nadu in particular will be closely watched as all but one of its 39 parliamentary seats go to polls on the same day. Polling in the Vellore constituency was cancelled after the election commission said it had found credible evidence of voter bribery.

In 2014 the AIADMK, led by former chief minister Jayalalitha, swept the state - winning 37 seats. Her death in 2016, followed by the death of her regional rival M Karunanidhi, has left a vacuum in the state. Despite that, voters are still likely to choose one of these two parties.

In the bellwether state of Uttar Pradesh (UP), which sends 80 MPs to parliament, there will be 15 seats up for grabs.

But this time, the party could face a tough fight. The two main regional parties - historic rivals who have both run the state - have banded together in a "grand alliance" to defeat Mr Modi.

In West Bengal, which will only see voting in two constituencies on Thursday, the state's chief minister Mamata Banerjee is hoping for a repeat of her strong 2014 performance. Her party, the Trinamool Congress (TMC), won 36 of the state's 40 seats in the last general election.

This time she is being challenged by Mr Modi's BJP, which is trying to make inroads here - the party picked up 17% of the popular vote in 2014, and won two seats.

The other states going to polls on Thursday are Assam, Bihar, Chhattisgarh, Jammu and Kashmir, Karnataka, Maharashtra, Manipur, Orissa, Puducherry, and Tripura.

How big is this election?

It is mind-bogglingly vast - about 900 million people above the age of 18 will be eligible to cast their ballots at one million polling stations. At the last election, voter turnout was about 66%.

No voter is meant to have to travel more than 2km (1.2 miles) to reach a polling station. Because of the enormous number of election officials and security personnel involved, voting is taking place in seven stages between 11 April and 19 May.

What are the key issues?

Hundreds of millions of Indians have escaped poverty since the turn of the millennium, but huge challenges remain.

Under Mr Modi, the world's sixth-largest economy appears to have lost some of its momentum. Although annual GDP growth has hovered at about 7%, unemployment is a major concern.

Mr Modi's government has been accused of hiding uncomfortable jobs data. In fact, a leaked government report suggests that the unemployment rate is the highest it has been since the 1970s.

Income from farming has also stagnated because of a crop glut and declining commodity prices, which have left farmers saddled with debt.

Unsurprisingly, both parties have targeted the rural poor in their campaign manifestos. The BJP has promised a slew of welfare schemes for India's farmers, while the opposition Congress party has promised a minimum income scheme for the country's 50 million poorest families.

National security is also in the spotlight this election after a suicide attack by a Pakistan-based militant group killed at least 40 paramilitary police in Indian-administered Kashmir in February. India then carried out unprecedented air strikes in Pakistan.

Since then, the BJP has made national security a key plank in its campaign.