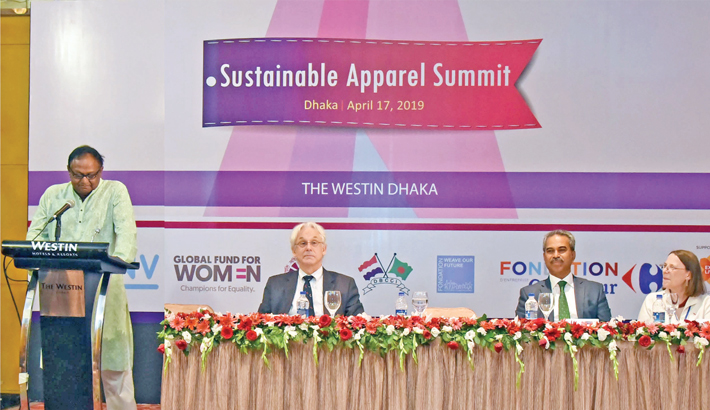 Commerce Minister Tipu Munshi speaks at the inaugural ceremony of Sustainable Apparel Summit at a hotel in the capital on Wednesday.

Commerce Minister Tipu Munshi on Wednesday urged owners of the garment factories to ensure workplace safety along with increasing others facilities to make apparel sector sustainable.

“Alongside ensuring reasonable wages, it is urgent to increase facilities of garment workers to produce the best quality products, which eventually will increase further export volume in the country,” he told at the inaugural function of the Sustainable Apparel Summit in a city hotel in the capital.

Commerce Minister Tipu Munshi, attended the programme as the chief guest, while Marie-Annick Bourdin, Ambassador of the France to Bangladesh and  Jeroen Steeghs, Deputy Head of Mission and Head of Economic Affairs and Development Cooperation of Embassy of the Kingdom of the Netherlands participated as special guests.

Faruque Hassan, President, DBCCI and Sr. Vice President, BGMEA concluded the session. The summit has been jointly organised by SNV Netherlands and Dutch Bangla Chamber of Commerce and Industries.

Marie-Annick Bourdin, Ambassador of the France to Bangladesh said if we look back in the history of apparel in this vibrant landscape, during the 15th to 18th centuries, Bengal was the most important center of cotton production, famous for the Muslin, which based particularly around the capital city of Dhaka.

Jeroen Steeghs, Deputy Head of Mission, and Head of Economic Affairs and Development Cooperation of Embassy of the Kingdom of the Netherlands thanked the participants for their presence in the summit.

In his speech, he said any step towards sustainability would ultimately benefit over 4 million workforce, most of them are women. It is one of the key sectors where Bangladeshi female workers have felt economically empowered.

Among the others, Anne-Laure Henry-Greard, Programme Manager, Better Work, ILO Bangladesh was also participated speakers of the summit.

Bangladesh is the second largest RMG exporter in the world, and this is the highest foreign currency earning sector in Bangladesh. Over 4 million workers are working in the RMG sector including 60 percent are women.